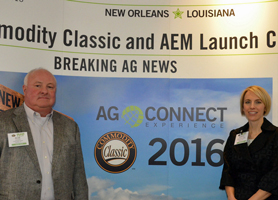 With corn, soybeans, wheat and sorghum growers all part of the Commodity Classic, who thought it could get any bigger?

But it will definitely be bigger in 2016 when Classic joins forces with AG CONNECT expo to become what may well be the biggest farm show on Earth.

“2016 will be the opening salvo into a new bigger, better,” said 2014 Commodity Classic chair Rob Elliott of Illinois. “The synergy aspect of it could be fairly significant.”

I talked with Rob at the NAFB Trade Talk about the partnership for 2016, as well as what is in store for 2014 in San Antonio and a little bit about this season on his farm near Monmouth, Illinois. Interview with Rob Elliott, NCGA

Sara Mooney, AG CONNECT show director with the Association of Equipment Manufacturers, says there are lots of details to work out in the next two years, but they are really excited. “The producers that attended AG CONNECT and our exhibitors and other stakeholders are really going to find that this combined event is really greater than its two parts alone,” she said. “More technology, more engagement with the whole ag community, more experts to talk to, more industry leaders - just more of that quality experience.”