In World of Polluters Oil Has No Rivals 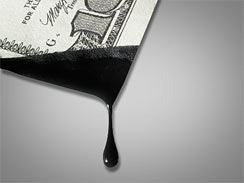 They call it black gold and Texas Tea but I prefer to call it environmental anathema; that rare combination of disgrace and abomination.  Better that than using the words that I would like to use that got my mouth washed out with soap as a child.

Ok, Thanksgiving is almost upon us so I want to purge a little bile so I will enjoy the day a little more. What better target than Big Oil?

You know, those heavily subsidized global scale polluters who control…I mean contribute to every politician to make sure they have their bases covered. Well after an announcement today, I guess we will see how well their “investment” pays off.

It seems gas and oil are almost singlehandedly responsible for the bulk of all the man-made global warming emissions since the dawn of the industrial revolution. Chevron, Exxon and BP are among the companies most responsible for climate change since dawn of industrial age, according to a new analysis.

The climate crisis of the 21st century has been caused largely by just 90 companies, which between them produced nearly two-thirds of the greenhouse gas emissions generated since the dawning of the industrial age, new research suggests.

I have always been a big fan of irony but this week takes the cake.  It seemed bizarre that earlier this week EPA announced their proposal to significantly weaken the Renewable Fuel Standard, reducing the volume of renewable fuels like ethanol for 2014; thus making us even more dependent on oil.

Odd that an agency with “Environment” in their name would turn away from a program that has cut emissions of greenhouse gas by 110 million metric tons, making it one of the most successful programs in the EPA arsenal. This is the equivalent of taking more than 20 million vehicles off the road.

Now it will get even more interesting to see how this same administration that purports to be on a crusade to fight greenhouse gases will deal with Big Oil now that the emperor has no clothes.