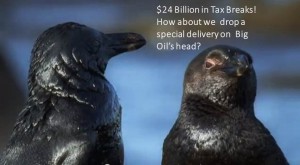 It’s tax time again. You know that short window during the year when it’s ok to complain about being taxed. Given the number of people who remain unemployed it really is kind of bad form to complain the rest of the year.

So as you belly up to do your part to keep the skids of government greased here is a whopper of a tax tale to help you really get the bile out and make your complaining count. I am guessing that it will come as no shock to you that each year the average American pays more than 20 percent of their income in federal taxes. This does not include state and local taxes.

So this begs the question; shouldn’t an industry that makes $175,000 per minute pay at least that much? This is a real number reflecting the profits of the five largest oil companies. Together they earn more in one minute than 95 percent of Americans earn in a year.

However, Reuters news service estimates that Chevron, ConocoPhillips, and ExxonMobil pays effective federal tax rates of 19 percent, 18 percent, and 13 percent, respectively. Reuters noted that this is “a far cry from the 35 percent top corporate tax rate.” Likewise the tax bracket for the most successful Americans is 35%.

The petrol industry has prospered over the past decade, thanks to high oil and gasoline prices. The five largest companies — BP, Chevron, ConocoPhillips, ExxonMobil, and Shell — earned more than $1 trillion during this time. In the first nine months of 2013, these five companies realized a combined $71 billion in profits. Certainly, these companies can prosper without $2.4 billion in annual special tax breaks.

It also seems the oil and gas industry has been the largest beneficiary of federal financial support in the entire energy sector benefitting from nearly 60 percent of all federal energy support since 1950.   Shouldn’t the lion’s share of these dollars be spent on new, alternative, renewable sources to make us less dependent on something as finite and as devastating to the environment as oil?

Big Oil will argue that these breaks are critical to job creation, but recent data from the Bureau of Labor Statistics shows oil industry employment is off 10 percent. This is not nearly as bleak as it sounds given that nearly half of the direct jobs touted by big oil are service station positions.