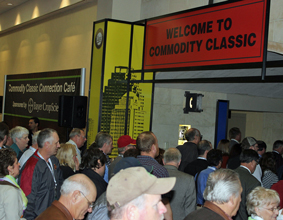 “We knew it was the biggest event ever, but the numbers really surprised us as we saw them rolling in over the course of the event,” said Commodity Classic Co-Chair Rob Elliott.

I talked to Rob just before the Classic actually got underway and he was already optimistic that it would be a record breaker. Interview with Rob Elliott, Classic Co-Chair