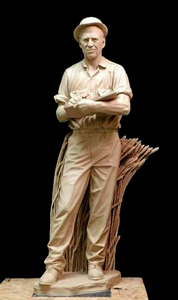 National Agriculture Day celebrations in Washington DC this year just happen to fall on March 25, the centennial anniversary date of the Father of the Green Revolution. As a fitting tribute, the State of Iowa will install a bronze statue of Dr. Norman E. Borlaug in the U.S. Capitol on that very day.

Each state is allowed to have two statues of notable citizens in the National Statuary Hall Collection at the U.S. Capitol Building. The statue of Borlaug will replace the statue of U.S. Senator James Harlan installed in 1910, which will be relocated to Mount Pleasant, Iowa. The second statue representing Iowa is of Governor Samuel Kirkwood, which was installed in 1913.

World Food Prize president Kenneth Quinn, chairman of the committee appointed by the governor of Iowa to develop the statue, says of all the people immortalized in that hall, Dr. Borlaug will be the only one honored for his work in agriculture. “The only real agricultural figure is going to be standing there amidst all of these presidents and generals,” said Quinn, who added that if you took all of the people in the hall and added all of the Nobel peace prize laureates “and you add up all of the lives that they all saved, they still won’t have done as much as Norman Borlaug did by himself.”

As the Father of the Green Revolution, Dr. Borlaug is credited with developing agricultural innovations that saved an estimated billion people around the world from hunger and starvation. Quinn likes to think that Dr. Borlaug’s presence in the nation’s Capitol will perform another great act for humanity by helping to bring politicians in Washington together. “During the most heated periods of recent politics, when Democrats and Republicans couldn’t agree on anything in our state legislature, the Republican-led House and the Democrat-led Senate in one day passed the resolution saying Norman Borlaug should be in Statuary Hall,” said Quinn. “He’s the one guy who can get them all in the picture.” WFP President Kenneth Quinn talks about Borlaug statue

More information about the statue is available at www.iowaborlaugstatue.org, and there will also be a webcast of the statue unveiling ceremony, which will take place on March 25 at 11 a.m. Eastern Time, at www.speaker.gov/live.