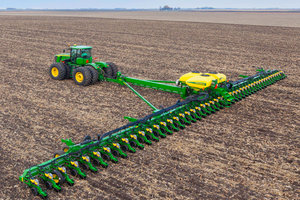 So corn planting is running behind the five year average right now - but it’s ahead of last year’s progress at this time and we had a record crop in 2013. Remember how the tortoise beat the hare in the old fable - slow and steady wins the race!

Illinois, Indiana and Iowa have barely begun to plant, according to the latest report out of USDA NASS this week. Just one percent in Iowa, two in Indiana and five in Illinois so far, but that is more than last year. And Missouri is actually just about caught up to the five year average with 26 percent planted while Kansas is ahead of average at 21 percent.

National Corn Growers Association President Martin Barbre of Illinois is confident planting progress will take off quickly as the weather warms. “Keep in mind that last year, planting season started off slowly, and we harvest a record corn crop in the fall. In 2012, planting flew by quickly, but severe drought plagued much of the country and damaged the overall crop. Farmers realize that a long planting and growing season, which may present opportunities and obstacles, still lies ahead.”