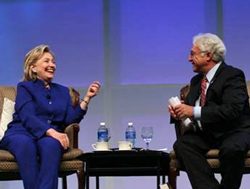 Hillary Clinton seems to be everywhere these days and this week she spent over an hour at the Biotechnology Industry Organization (BIO) convention in San Diego chatting with BIO president and CEO Jim Greenwood, a former congressman from Pennsylvania.

The wide ranging discussion touched on a variety of topics, including agricultural biotechnology. Greenwood asked Mrs. Clinton where she stood on the use of genetically modified crops. “I stand in favor of using seeds and products that have a proven track record,” said the former first lady, adding that the case needs to be made for those who are skeptical. “There is a big gap between what the facts are and what the perceptions are,” she said, receiving applause from the packed crowd that included as many as possible of the 15,000 attendees at the convention.

Clinton noted that focusing on the benefits in terminology of the crops could help. “Genetically modified sounds ‘Frankensteinish’ - drought resistant sounds really like something you want,” she said.