I was in Washington DC last week for the National Corn Growers Corn Congress. I extended my stay to do some sightseeing with my grown son, so I ended up spending 6 days in DC, which is way too long. I’ve been smiling nonstop since I returned home, just happy to be here, somewhere normal! It’s not my first trip to DC, but I did accumulate a lot of random observations.

I spent most of my time with farmers from Kansas and many other states. Words that describe my farmer friends include the following: kind, intelligent, polite, funny, sophisticated, outspoken, focused, professional, friendly, well-rounded, honest, informed. Our farmers sat through long committee meetings, two delegate sessions and visited every member of our Congressional Delegation. All the while, they were also using their smart phones and tablets to keep track of the markets, check email, and kept in contact with their families at home who were running the farm in their absence. 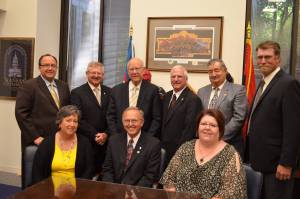 There were many farewell speeches at Corn Congress this year with NCGA Exec Rick Tolman retiring, as well as Nebraska Corn’s Don Hutchens, Monsanto’s Marsha Stanton and John Deere’s Don Borgman. Our own Jere White was honored at the March Corn Congress session for his retirement. New leaders will rise to take their places, but those are some big shoes to fill.

Speaking of leaders, I was so impressed with the members of the DuPont New Leaders Program offered through NCGA. Farm couples are encouraged to go through the program together. This cultivated two new leaders from Kansas: Tom and Sandy Tibbits of Minneapolis. The program’s final session was held around the Corn Congress event. We were happy to have them along on our Hill Visits and Tom was able to help Kansas Corn by serving as a delegate. Tom is already on the KCGA board and we have plans to use make use of Sandy’s skills as well as an advocate for agriculture.

Speaking of Hill Visits, many of the Congressional offices have offered Russell Stover candies to their visitors for years. With the new Mars candy factory in Topeka, many of our offices have candy bowls with Peanut M&Ms and Snickers bars as well! And Cheezits. Did you know all Cheezits are made in Kansas?

I serve on the Corn Farmers Coalition steering committee, an image program that aims to educate and inform Washington DC decision makers about corn farmers. This year’s campaign has just begun and I saw our full page ad in The Hill newspaper, as well as ads online and intheMetro trains. This year’s ads have an innovation and technology theme because the focus groups we used when planning this year’s campaign were fascinated by the use of technology on our farms. I remember one focus group participant saying, “It’s kind of neat to think that those farmers are using the same iPad as me.” It is not always easy to overcome the stereotypes about farmers that many people have. On one hand, they are surprised to learn that 98 percent of all corn farms are family farms–many folks think that our farms are owned by big corporations. On the other hand, they think farmers look and work on the farms just like they did 50 years ago. When we talk to these people about GPS guidance and mapping, precision agriculture, they get really excited. 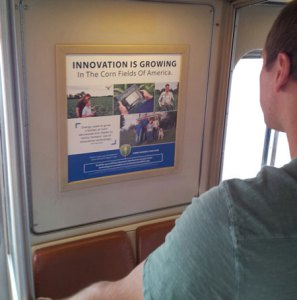 This Metro passenger was extremely interested in our CFC ad!

There is some corn planted in front of USDA. And the US Botanic Gardens is featuring a wheat display called Amber Waves of Grain.

I saw a lot of advertising in DC. I saw an excellent ad in a Metro train placed byHumane Watch. It explained that HSUS, the Humane Society of the United States, only gives 1 percent of its funding to local humane shelters and encourages people to donate to local humane society shelters instead.

On the Metro, we sat next to a woman holding a takeout bag from Chipotle. Over the years, I’ve discouraged my kids from eating at Chipotle for various reasons (primarily because it’s danged expensive!), but also because of how the corporate burrito company bashes farmers who grow the food. Sitting next to my son, who is a devout capitalist, I pointed to the bag in the woman’s lap and told him to read it. This quote is from Chipotle’s “Cultivating Thought” Author Series. 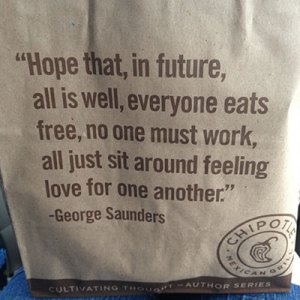 If no one must work, who will make the burritos?

I’m all for love and peace, but just sitting around feeling love for one another might get a little boring after a while.  More importantly, Chipotle, if no one works, where will all that free food come from? Who will make the burritos? I’m for free speech and an open exchange of ideas, and I enjoyed reading the bag that held a nine dollar burrito. But I do have the right to disagree. My capitalist son, who in the past has been disturbed by Chipotle’s anti-farmer statements but still ate the corporate burritos, was even more disturbed by that quote.

Norman Borlaug is the new guy in Statuary Hall at the Capitol.

We saw the new statue of Norman Borlaug, the Father of the Green Revolution, during our tour of the Capitol. That an Iowa plant breeder is honored in this way Statuary Hall in the Capitol is significant. His work which created a high-yielding, disease resistant wheat is credited for saving a billion lives. Borlaug was a strong supporter of the promise of biotechnology and urged people to stand up to the anti-science crowd. 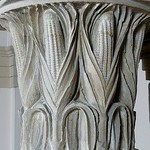 A corn capital at the Capitol

I couldn’t help but wonder if anyone has ever counted up the number of Greek columns in DC? It made me remember the Architecture Appreciation class I took at K-State where we learned about Doric, Corinthian and Ionic columns. Speaking of art and architecture, if you are a corn grower, look around in DC–there are many depictions of corn in the Capitol and many other places. In fact, the photo here shows a corn capital in the Capitol. A capital is the top of a column. According to the Architect of the Capitol: Carved by Giuseppe Franzoni from Aquia Creek sandstone, these columns were installed in the Hall of Columns of the U.S. Capitol in 1809. The fluting of a conventional shaft was recalled by bundled corn stalks. On the capital, husks were folded back to reveal the cob and kernels of corn.

I was struck by the friendliness of the people in DC on this trip. I think this was influenced by the unusually cool weather. One cab driver told us that the cooler weather was a disaster for cabbies because everyone wanted to walk instead of taking a cab. He joked that he would have to charge us double. Judging by his meandering route to our destination, I don’t think he was kidding.