“There is no humanity without the cultivation of the land; there is no good life without the food it produces for the men and women of every continent.” Pope Francis, 1/31/15 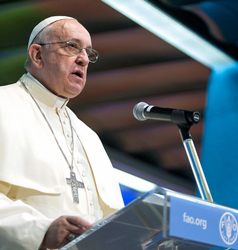 With the patron saint of all things of nature as his namesake, Pope Francis has serious views about protecting the environment, but he believes that agriculture plays a “central role” in the “cultivation and stewardship of the land.”

That’s what he said recently in a meeting with the National Confederation of Direct Cultivators, which is some kind of agricultural organization, as the pontiff noted that the name “direct cultivators” refers to cultivation, “a typically human and fundamental activity.” Pope Francis said that farming and ranching constitutes “a true vocation.”

“It deserves to be recognised and suitably valued as such, also in concrete political and economic decisions. This means eliminating the obstacles that penalise such a valuable activity and that often make it appear unattractive to new generations, even though statistics show an increase in the number of students in schools and institutes of agriculture, which leads us to foresee and increase in the numbers of those employed in the agricultural sector. At the same time, it is necessary to pay due attention to the removal of land from agricultural use, to make it available for apparently more lucrative purposes” 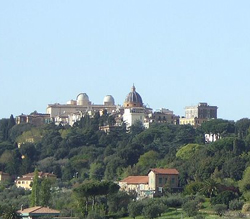 The pope actually has his own farm at the traditional summer place for pontiffs, Castel Gandolfo.

The 55 acre farm dates back to the early 1930s under Pope Pius XI as part of the renovation of the summer vacation home which has been in use since the 16th century. The farm includes cows, chickens, bee hives, ostriches, turkeys, rabbits, vegetables and more. The farm reportedly produces 185 gallons of milk a day, 50,000 eggs a year, honey, olive oil and vegetables.

There are news reports that the farm may be opened for public tours this year, but the Vatican has not confirmed that yet. I’d be interested in a visit if it happens!