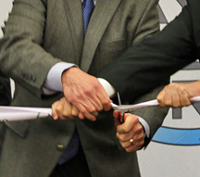 The Commodity Classic trade show ribbon cutters were having a hard time with some dull scissors so it came down to a pocketknife to start the show. Good reason to pack it in your suitcase or drive to an event - you never know when that pocketknife can come in handy!

Once again, Commodity Classic set new records for both the trade show and attendance. The trade show featured 355 booths and attendance broke the record on the first day with 7759 registered and more expected in the final numbers. 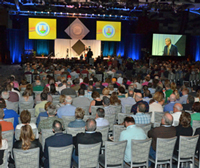 Agriculture Secretary Tom Vilsack has now attended more than one quarter of the 20 Commodity Classics, with his sixth appearance last week. Vilsack said he felt “in the presence of greatness” at the event, and spent much of his address talking about the importance of Trade Promotion Authority for the president in achieving new trade agreements. Vilsack Addresses Commodity Classic 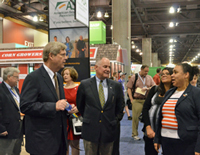 After spending the whole morning visiting with farmer leaders, addressing attendees, and meeting the press, Secretary Vilsack took a quick stroll through part of the Commodity Classic trade show before heading out. He visited each of the commodity organization booths, all of the USDA booths, and a few others along the way, like the Renewable Fuels Association.