The first Obama budget announced today would end direct payments for farms with large sales and incomes that receive a disproportionate amount of the payments, according to Agriculture Secretary Tom Vilsack speaking at USDA’s Annual Ag Outlook Forum. According to Office of Management and Budget Director Peter Orszag, the president is “proposing to phase out those payments over time for farms with revenue of more than $500,000 a year.” 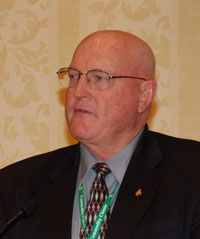 With that announcement coming out as the 2009 Commodity Classic was getting underway, it was the first question that came up during a press conference with National Corn Growers Association president Bob Dickey, a grower from Nebraska, who says they are very concerned about that statement but they need to examine the proposal closer.

“I can tell you that we will take a strong stand to defend out corn producers,” Dickey said. “We do have policy on that and we will defend our policy.”

The budget would also support the implementation of a 250-thousand dollar commodity program payment limit and reduce crop insurance subsidies.

On the plus side, Obama’s 3.55 trillion dollar budget for fiscal year 2010 would provide over 20-billion dollars in loans and grants to support and expand rural development activities and make investments to double the nation’s renewable energy capacity.

Secretary Vilsack Speaks To The Press 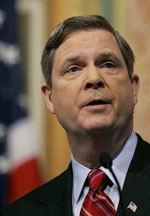 Our new U.S. Secretary of Agriculture, Tom Vilsack, just completed his inaugural teleconference with the media. With opening and closing statements and Q&A, it’s about 50 minutes long. I’m betting we’ll hear a lot about it over the next couple days.

Of course there is a lot in it for corn growers and anyone involved in agriculture to be interested in. You can listen to and even download the full call-in on AgWired at this link.

One piece I pulled out that you might find interesting is on the Secretary’s answer to a question about increasing the blend cap for ethanol. A reporter asked if sound science and data supports an expansion of the ethanol blending cap. He didn’t really directly answer that but said that USDA would support accelerating research on ethanol production and promoting second and third generation feedstocks.

You can listen to the Secretary’s answer to that question here:

President-elect Obama has announced former Iowa governor Tom Vilsack as his choice for Secretary of Agriculture and Colorado Sen. Ken Salazar as interior secretary. Both appointments are good news for the agriculture industry.

Vilsack served two terms as governor of Iowa from from 1998 until 2006 and was a short-lived opponent of Obama’s in the presidential race. As governor, Vilsack was a strong supporter of ethanol and other biofuels as a way to help rural economies. In his brief run for the Democratic presidential nomination last year, Vilsack made the focus of his campaign a plan to end U.S dependence on foreign oil by promoting alternative energy sources.

By the way, the last Secretary of Agriculture from Iowa was Henry Wallace who served under Franklin D. Roosevelt from 1933 to 1941. Wallace was a plant geneticist who founded what is now Pioneer Hi-Bred.

As for Salazar, the interior secretary will play a key role in setting the new administration’s environmental, energy and land-use policies.

Salazar has also has been a strong supporter of biofuels, this year co-sponsoring the Open Fuel Standard Act, legislation would require that half of all new automobiles starting in 2012 be flex-fuel vehicles warranted to operate on gasoline, ethanol, and methanol, or be warranted to operate on biodiesel. Colorado Governor Bill Ritter will have to appoint a replacement to complete Salazar’s term in the Senate through 2010. Among the contenders is Salazar’s brother, John, a potato farmer who serves in the U.S. House of Representatives.

World Food Conference to Focus on Biotech and Biofuels

Agriculture Secretary Ed Schafer will present a three pronged strategy to deal with rising food prices, climate change and energy security when he travels to Rome next week for the conference on World Food Security being held by the Food and Agriculture Organization (FAO) of the United Nations.

Schafer says the strategy is basically to “provide food and other support to people who are hungry now, direct development assistance to those countries best able to rapidly increase the production of key food staples that can help feed the hungry, and encourage action to address multilateral and country-specific policies that prevent access to food and the technologies that produce food.” 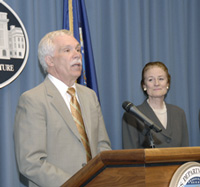 To try and encourage greater use of biotechnology, Schafer and Director of U.S. Foreign Assistance Henrietta Fore will host a side event focused on new technologies to showcase developing countries that have moved forward with public investment in adoption of bioengineered products. “Bioengineered crops are one of many situations that need to take place for increasing yields around the country if we’re going to meet the demands of increased consumption,” Schafer says.

Biofuels will most definitely be on the plate at the World Food conference and Schafer is prepared to defend US ethanol production policy. “I would point out that in the United States and in other countries as well, all ethanol production specifically has come from increased yields in the corn crops,” Schafer said. “Our export markets are up in corn out of the United States. The yield increases are taking care of it, and certainly the benefits derived are much more than the 2 to 3 percent that is contributing to the rising inflation in food costs internationally. We think it’s an important initiative, and while people do have some concern I think we can point out the facts here, not the emotions but the facts, that this is not distorting the global price of food. And it’s an important direction we need to go.”

The conference will be held June 3-5.

Comments by President Bush this week that corn prices are affecting food prices required some explanation after the fact by Secretary of Agriculture Ed Schafer.

Talking to Brownfield Network reporter Peter Shinn afterward, Schafer said there is no inconsistency between the President’s remarks about the impact of corn demand from the ethanol industry on food prices and the long-held USDA position that higher energy prices play a greater role in food price inflation.

“Well, I think the President stated an obvious fact that everybody knows today that food prices are being challenged by fuel prices,” Schafer said. “But really, this is a consistent administrative policy and direction, and I was pleased the President pointed out the fact that, though corn prices are under pressure right now, the pathway is to cellulosic ethanol.”

Schafer addressed WIREC on Tuesday and hosted a ministerial luncheon at the event Wednesday. WIREC 2008 featured representatives from over 100 countries with attendance estimated at seven to eight thousand. The event wrapped up Thursday.

Schafer addressed the issue in his remarks, stressing that the situation is short term.

“For today and tomorrow the growing demand for ethanol is likely going to mean that corn prices will stay higher than you want them to be,” Schafer said. But he believes the energy bill outlines a plan to move the industry rapidly toward cellulosic ethanol production which should ultimately help ease feed price pressure.

“As that technology develops and as we move into non-feed sources to generate our energy needs, it will stop distorting the prices of your feed,” Schafer told the cattle producers.

You can listen to Secretary Schafer’s comments here: