Despite the economy, the farming community has turned out in droves for the 2009 Commodity Classic in Grapevine, Texas this week. 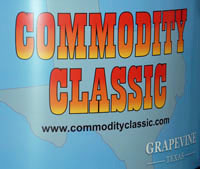 This is the first Classic to feature four commodities under one roof - corn, soybeans, wheat and now grain sorghum. Pre-registrations were almost the same as last year with more farmers registered than ever before.

The theme of the 14th Annual Commodity Classic is “Discover Bright Horizons” and features educational sessions on topics such as managing risk, energy independence, farm finances and nitrogen strategies.

There are so many events going on at the Classic that it’s hard to keep up. Committee meetings, state caucuses and policy discussions are being held in nearly every room of the Gaylord Texan Resort in Grapevine. The sold-out trade show is the largest in Commodity Classic history, with more than 230 companies in more than 940 booths.

The weather is sunny and the mood is upbeat here in the Lone Star State - no economic crisis here!

This Texas Meeting Will Be Classic

It’s hard to believe that in just over a week corn growers and other industry leaders will be gathering for the annual Commodity Classic. This year’s event takes place in Grapevine, TX and Cindy and I will be there to provide you with some Corn Commentary.

Here’s some reasons to attend:

You are of course invited to attend:

The National Corn Growers Association has introduced “The CORNer Store” - a one-stop shop for all things corn.

The store is a virtual cornucopia of corny gifts, apparel and promotional items - from bibs and buttons to bears and beer steins. All kinds of fun stuff with various national and state corn grower group logos.

One of my favorite items is the doggie t-shirts, which come in a variety of logos. There are also wall hangings, calendars, stickers, magnets, hats and more.

You can also order PLA (plastic made from corn) materials from Brenmar Corp, or choose from more than 600 products available through the Corn Products Guide.

Great idea! Hope they will be adding more items in the future. One request would be items with the logos from previous Commodity Classics with the corn and soybean and wheat guys. The popular cartoon-like characters have been “discontinued” and will not be appearing on tee-shirts and signs at the 2009 Classic.

Five deserving young college students from all over the nation were awarded the first NCGA Academic Excellence in Agriculture scholarships, sponsored by BASF, at the Commodity Classic on Friday.

Ken McCauley, chairman of the NCGA, was pleased to announce and congratulate the recipients: 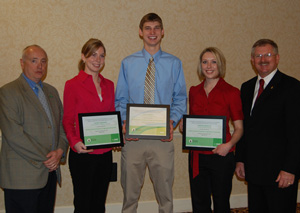 Lauren, Jamie and Catie are pictured here with Adam Burnhams of BASF and Ken.

Catie, who is a graduate student at Colorado State University, spoke for the winners during a press conference. “I was extremely flattered and felt honored by the ag community when I heard I won the scholarship. As a graduate student, there aren’t a lot of scholarships that I’m eligible for. A lot of scholarships for grad students are not in ag. They are for areas of study like microbiology. This is near and dear to my heart to be recognized by BASF and NCGA with this scholarship. That’s (ag) where I came from and it makes me feel like I haven’t strayed too far from home.”

Ken says they received 80 applications for the five $1000 scholarships and they expect many more this year when the program continues with BASF’s sponsorship. 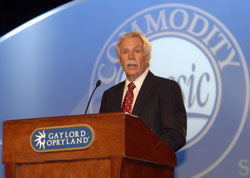 New Secretary of Agriculture Ed Schafer made his first appearance before corn, soybean and wheat growers at Commodity Classic on Friday.

Schafer talked about the farm bill of course and expressed optimism that we’re getting closer to an agreement. We can only hope!

You can listen to Secretary Schafer’s speech here:

USDA released a document (Word doc) “developed from Administration analysis of impacts to current USDA programs - in the absence of enactment of a new farm bill or an extension of the 2002 farm bill past March 15, 2008.”

Tuning up for Success in Nashville 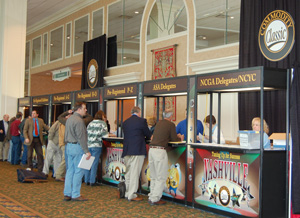 Registration is underway in Nashville at the Opryland Convention Center for the 2008 Commodity Classic. Some 4000 corn, soybean and wheat growers, industry representatives and partners are expected to attend the event, which just keeps getting bigger.

Today is meeting day for the different commodity groups and time for everyone to get oriented to this small city that is the Opryland. No need to work out here - just the walk from one end to another is exercise enough!

The farm bill - or lack thereof - is the main topic of discussion in the hallways here. And we can expect to hear more about that when Agriculture Secretary Ed Schafer speaks on Friday during the general session.

Sorghum Added to Classic Next Year 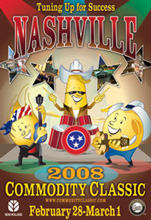 Next year’s logo for Commodity Classic will have four amigos, instead of just three.

Sorghum will join corn, soybeans and wheat for the 2009 Commodity Classic Feb. 26-28 at the Gaylord Texan Resort and Convention Center on Lake Grapevine in Grapevine, Texas.

“We are very excited to take part in Commodity Classic in 2009,” said National Sorghum Producers President Dale Murden. “We recognize that farmers grow diverse crops and Commodity Classic gives producers the opportunity to network and learn about corn, soybeans, wheat, and now sorghum all at the same time.”

Meanwhile, information about this year’s Classic, coming up next week, is available at www.commodityclassic.com. 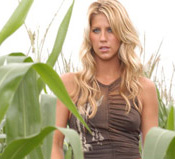 As Ken commented on the previous Shannon Brown post - if you miss her at the National Ethanol Conference, you can see her in Nashville at the Commodity Classic.

“Corn Fed” Shannon will join John Conlee, Joe Diffie, Carolina Rain and The Steeldrivers for an exclusive show at the Grand Ole Opry during the Evening of Entertainment wrapping up the 2008 Commodity Classic convention March 1 in Nashville, Tenn.

“This is a great lineup of talent for our private Evening of Entertainment,” said Commodity Classic co-chair and ASA Vice President Randy Mann.

Commodity Classic is the combined convention and trade show of the American Soybean Association, the National Corn Growers Association, and the National Association of Wheat Growers. It will be held Feb. 28-March 1 at the Gaylord Opryland Resort across from the Grand Ole Opry.