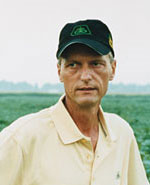 The issue out last week featured the famous corn and soybean yield contest winner from Purdy, Missouri as an example of how farmers are using biotechnology and precision agriculture to feed the world.

Kip has become somewhat of a legend in the corn and soybean world, consistently producing top yields in national contests. While this year was a little challenging for him weather-wise, with drowning rains during the spring in his home turf of Southwest Missouri, Kip still managed to earn top honors in three categories for the 2008 National Corn Yield Contest - taking first in the AA No Till/Strip Till Non-Irrigated category with almost 321 bushels per acre.

Read the article about Kip in Wired Magazine here.