Vaccine on the Cob 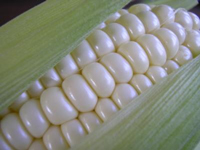 Iowa State University researchers are studying how to put flu vaccines into the genetic makeup of corn, which could someday allow humans and animals to get a flu vaccination simply by eating corn or corn products.

“We’re trying to figure out which genes from the swine influenza virus to incorporate into corn so those genes, when expressed, would produce protein. When the pig consumes that corn, it would serve as a vaccine,” said Hank Harris, professor in animal science and one of the researchers on the project.

The corn vaccine would also work in humans when they eat corn or even corn flakes, corn chips, tortillas or anything that contains corn, said Harris.

The research is funded by a grant from Iowa State University’s Plant Sciences Institute, and is their Biopharmaceuticals and Bioindustrials Research Initiative. The corn vaccine may be possible in 5 to 7 years if research goes well.