There’s a good chance that quite a bit of the corn about to be harvested in the Midwest this fall got its start in Hawaii. 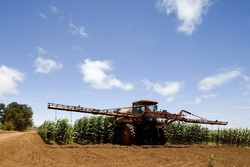 According to the latest report from the the Hawaii Field Office of USDA’s National Agricultural Statistics Service (NASS) the value of Hawaii’s seed industry for the 2008/2009 season was a “record high” of $176.6 million. Seed corn accounts for $169.3 million, or 96 percent, of the total value. According to NASS, acreage devoted to seed crops will increase 12 percent from the previous growing season to a record of 5,930 acres.

In fact, a recent Hawaii Farm Bureau Federation study shows that seed crops have become the largest agricultural commodity in the state, exceeding the value of both sugar and pineapple by 180 percent and 90 percent, respectively.

All the major seed companies have operations in Hawaii on a total of about 6,000 acres. Syngenta Seeds Corn Product Development Lead Ben Hable says it allows them to get new products to market faster. “In Hawaii we can actually turn a crop every 3 and a half months so we can increase the seeds that we need to get back here to the mainland for seed production,” Ben told me during an interview at the grand opening of Syngenta Seeds new headquarters in Minnetonka, MN this week. “Syngenta now has over 300 full time staff in the state of Hawaii working on corn and soybean seed production.”

Listen to my interview with Ben here:

Read more about this story here.