Seeds of Trouble in Paradise

Most people are unaware that much of our nation’s seed corn supply hails from the Aloha State. In fact, seed corn is now the biggest segment of Hawaii’s agriculture sector, valued at $243 million, according to the most recent statistics. 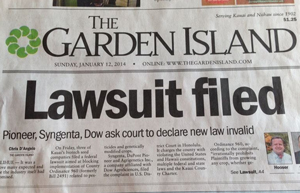 The seed crop industry started about 50 years ago in Hawaii, but since 2000 the industry has grown by an astronomical 548%, with all of the major seed players having a stake in about ten farms totaling some 25,000 acres on four of the Hawaiian islands. These farms use both conventional as well as biotech plant breeding methods to grow seed crops, mostly corn, and all of it is exported to both North and South America for further development and distribution.

Needless to say, the industry is very valuable to Hawaii in terms of employment and economic benefit - as well as to farmers working to feed a growing world population - but in the past year movements have cropped up to place restrictions on seed companies in terms of pesticide use and genetically modified crops. After a heated and prolonged battle last year that included a veto by the mayor who then received death threats, Kauai County passed such an ordinance in November. Now three major seed companies impacted by the law have filed suit against the county.

Under the ordinance, scheduled to take effect in August, open-air testing of experimental pesticides would be prohibited and a moratorium would be placed on the development of new genetically modified crops. In the lawsuit, the companies note that their activities are already regulated by state and federal governmental agencies and that the local law would place “burdensome and baseless restrictions on farming operations.”

While cloaked with the purpose of protecting the “health and natural environment” of Kauai and its people, this is clearly the work of anti-GMO activists, such as The Center for Food Safety which has been heavily involved in the local action. Just another weapon being used in the war against progress to feed a growing world population.