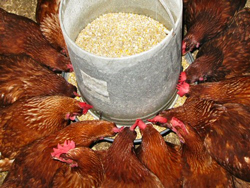 USDA increased the projected use for livestock feed in the latest World Agricultural Supply and Demand Estimates out on Friday.

Total U.S. corn use for 2009/10 is increased 5 million bushels. Feed and residual use is projected 50 million bushels higher reflecting the higher forecast yield and crop.

Joe Victor with Allendale, Inc. says this reflects optimism in the poultry sector. “If we are going to take combined corn and meal and take 1.8 pounds of feed fed for a pound of protein meat gained for those birds in the broiler sector, we are seeing a similar trend to what we had in 2007 before the big crash in 2008,” Victor said in a Minneapolis Grain Exchange crop report conference call on Friday. “It is the poultry sector that is the number one user in the feed use column for soybean meal and the number two user for corn.”

USDA also increased food, seed, and industrial use for corn by 5 million bushels on higher expected use for sweeteners with tight sugar supplies, but ethanol use remains unchanged at 4.2 billion bushels.

Offsetting most of the increase in domestic use is a 50-million-bushel reduction in projected exports. Increased supplies of feed grains in Canada and larger world wheat supplies are expected to increase competition for U.S. corn exports. Corn ending stocks for 2009/10 are projected 37 million bushels higher and just below the revised estimate for the 2008/09 marketing year. The 2009/10 marketing-year average farm price projection is unchanged at $3.05 to $3.65 per bushel.