George Patton Was Tough Enough to be a Farmer

“You need to overcome the tug of people against you as you reach for high goals.” – General George S. Patton 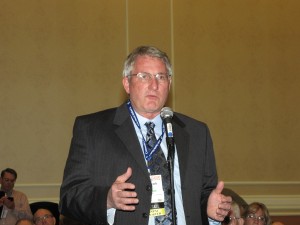 In the quiet after the storm we call Commodity Classic it I had a few thoughts, other than sleep, that might be worth sharing. First, I hope everyone who participated feels good about making the time and being a part of the process.

Being a leader isn’t easy but it definitely has its moments. And Classic is a shining moment where the power of a grassroots organization and how it operates is on full display.

It seems that at every Classic from the sessions of Corn Congress to the great slate of speakers one clear theme emerges. It did so with a redundancy that was more remarkable than ever at the 2010 event. Growers talked about it in the hallways and speaker after speaker told growers that the industry is under attack from several quarters by food elitists, animal rightists, select environmental groups, and even unnecessary government regulation.

Although these efforts are backed by few they are a loud minority that often have deep pockets, a friendly media willing to hand them the microphone with little analysis or editing, and a zealotry and singleness of purpose that is as remarkable as it is disturbing.

Normally reticent, hard working farmers need to respond at every opportunity and that will mean carving out some time every week to tell your story. So tell it to anyone that will listen…from the local Lion’s Club or Rotary to the vast reaches of Social Media space the battle is on.

As General George S. Patton said, “A pint of sweat saves a gallon of blood.”  With the thin margins in agriculture today there is little blood to lose and farmers are no strangers to sweat.

Perhaps author scientist Dr. Jay Lehr said it best during the general session at Commodity Classic when he challenged farmers to devote an hour a week to present Ag’s message and save their profession.

In the interest of morale in the industry I also want to point out that some people get it and these voices can also help us in our efforts to educate the masses. Bill Gates of Microsoft fame is a good example. In a recent article he said:

“Whenever I read about farming, I’m reminded how tough it is. Between the weather, weeds, viruses, insects and other pests, farming is a constant struggle, always posing new challenges. A city boy like me can think of it as putting a seed in the ground and waiting for nice stuff to grow. Wrong.”

You don’t have to be an expert to be an advocate. Just tell your story and when you see things like Gate’s comment store them away for later use.