A new report out this week finds that biotech crops are good for both farmers and the earth.

According to the report released Tuesday by the National Research Council, “farmers who grow genetically engineered (GE) crops are realizing substantial economic and environmental benefits -such as lower production costs, fewer pest problems, reduced use of pesticides, and better yields - compared with conventional crops.” The report also noted that “The proprietary terms under which private-sector firms supply GE seeds to the market has not adversely effected the economic welfare of farmers who adopt GE crops.” In other words, farmers are still making more money from BT crops, even though the seed costs more and they are legally unable to save it from one season to the next. 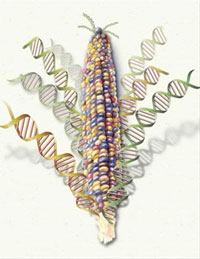 On the environmental side, the report concludes that improvements in water quality could prove to be the largest single benefit of GE crops. “Insecticide use has declined since GE crops were introduced, and farmers who grow GE crops use fewer insecticides and herbicides that linger in soil and waterways. In addition, farmers who grow herbicide-resistant crops till less often to control weeds and are more likely to practice conservation tillage, which improves soil quality and water filtration and reduces erosion.”

The only bad news in the report was that weeds are becoming resistant to the Roundup herbicide glyphosate - which is genetically bred into a large percentage of the soybeans, corn, and cotton grown in the United States. “Farmers who grow GE herbicide-resistant crops should not rely exclusively on glyphosate and need to incorporate a range of weed management practices, including using other herbicide mixes,” the report suggests. “Federal and state government agencies, technology developers, universities, and other stakeholders should collaborate to document weed resistance problems and develop cost-effective ways to control weeds in current GE crops and new types of GE herbicide-resistant plants now under development.”

The industry is well aware of this issue and has already been taking exactly those steps to address it for several years now. It’s interesting, although not surprising, that the vast majority of news stories about this report have chosen to focus on this negative finding, rather than the environmental and economic benefits attributed to biotech crops. That is mainly due to groups like the Center for Food Safety calling attention to it and making statements not backed up with any facts, such as this: “The leading independent study demonstrates that Roundup Ready crops and resistant weeds have increased use of herbicides (weed-killing pesticides) by 383 million lbs. over what would otherwise have been used in the 13 years from 1996 to 2008. Resistant weeds also trigger greater use of soil-eroding tillage, and in some cases manual hoeing to remove weeds, as well as higher production costs.”

Biotech crops are still relatively young, having only just come on the market 14 years ago - still just a teenager. Maybe they are just going through that rebellious teenage phase. But since the studies indicate more benefits than drawbacks to their use at this point and we have a growing world population to feed it seems like best to focus on the upside potential.