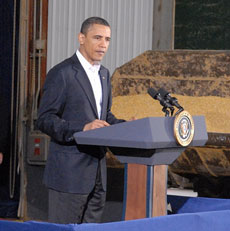 Standing next to a front end loader filled with corn at an ethanol plant in Macon, Missouri on Wednesday, President Obama stressed his administration’s goal to more than triple America’s biofuels production in the next twelve years, and noted that “there shouldn’t be any doubt that renewable, homegrown fuels are a key part of our strategy for a clean energy future.”

Missouri Corn Growers Association CEO Gary Marshall was thrilled that the president visited a corn-based ethanol plant in his state. “It’s fantastic, primarily because it is the first time since he’s been sitting as president that he’s toured an ethanol plant, so I think it bodes very well for future of the corn-based ethanol industry in this country,” Gary said in an interview with Agwired’s Chuck Zimmerman. “This symbolic visit to a corn-based Midwest ethanol plant could really drive a lot of the issues we’re working on at the national level. Whether it’s re-doing the tax credits for ethanol, whether it’s E15 which we think we need to go to because we’re maxed out on the blend wall, or even moving corn-based ethanol forward as an advance biofuel. This just kind of kicks off that entire effort for us.”

Watch the president’s speech here and see photos from the event in this Flickr photo album, courtesy of Agwired.