The Anti-Ethanol Circus is in Town! 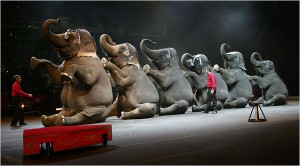 My brother-in-law recently asked me why ethanol had a great reputation for two decades and suddenly seems to be getting pounded constantly, especially in editorial/opinion pages by the media.

He doesn’t have a farming background and isn’t invested in the ethanol industry so he is a neutral and somewhat uninformed observer. He is also one of the busiest guys I know so for him to notice it means the anti-ethanol crowd are now officially pervasive. Apparently, it’s not just me feeling paranoid.

The conversation came back to me in a hurry this week with the latest “ethanol is evil” Tsunami rolling across the country once again. It started with the Wall Street Journal  (No link here because you have to pay for this tripe) and the Washington Post and worked its way across the country hitting the Chicago Tribune and Des Moines Register yesterday and likely making its way for the West Coast like some cheap traveling circus.

And like the aforementioned Circus the anti-ethanol gang leave a trail behind much like Barnum and Bailey’s elephants only there is no guy with a shovel and bucket cleaning up in their wake. They leave their load of “misinformation” to fester in the road in full knowledge that most people are also too busy to check the veracity of their propaganda.

The public lynching of ethanol began with the bogus food vs. fuel charade in 2008 and since then has continued to resurface over and over again in several different guises that get trotted out and recycled whenever opportunity presents itself.

Several things remain consistent as the attacks continue. The noxious cocktail they serve up is made with equal parts of the best bad science money can buy and poor logic. And the olive on the toothpick seems to be just plain old avarice.

That’s greed, materialism, or covetousness with a Capital “C.” The people fanning the fires of these attacks have rationale and motivation that are simple if not transparent. They are the folks that want the cheapest corn possible because it boosts their profits; want ethanol to be made from another source; or want ethanol crippled forever because the market share just got too big.

So, for the next couple of days come back here and you will get a sneak peak each day of some of these players and the Machiavellian games they play and fund all to snuff out the only real competition that imported petroleum faces in the marketplace today…ethanol.