And the Hits Keep on Coming

It seems that the attacks on corn commodities and corn ethanol will never stop. In a new report released last week called Green Scissors 2010, Friends of the Earth (aka FOE, how apropos) is calling for an end to subsidies in several areas including agriculture, biofuels, energy, infrastructure, and public lands. 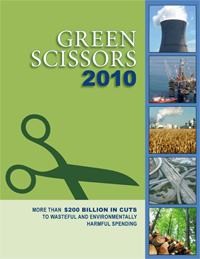 Many of the recommendations of this report cut into corn ethanol from various angles. First, FOE calls for an end of government subsidies for commodity crops including corn. Next, they call for an end of ethanol subsidies, specifically the ethanol tax credit (VEETC) and the ethanol tariff. They do, however, acknowledge that the subsidies directly go to oil but indirectly help the ethanol and agricultural industry.

They write on their website, “Tens of billions of dollars of taxpayer money has already been wasted under the credit [VEETC]. And these funds do little more than to further line the coffers of the oil industry. This coalition is working to prevent an additional 30 billion plus dollars from being lavished on the industry to fulfill a legally mandated requirement to blend an environmentally harmful fuel into another environmentally harmful one.”

If attacking the subsidy issue isn’t enough, they also attacked corn and corn ethanol on multiple environmental fronts including water quality (Dead Zone and hypoxia) as well as the ‘major’ amount of land that must be used to grow the crops. They go so far in the report to accuse corn-ethanol as being a bigger environmental offender than petroleum.

Corn ethanol may not be perfect, but I can’t stomach the false accusation that corn ethanol is environmentally worse than petroleum. But maybe the most frustrating thing is that not only is Friends of the Earth uneducated about agriculture and the corn ethanol industry, they don’t want to be. And in a world that is so “concerned” about the environment, FOE’s refusal to be open to non-fossil fuel options is a disservice to the American public.