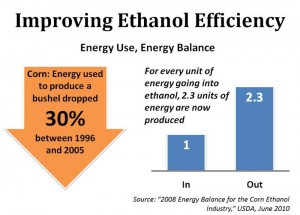 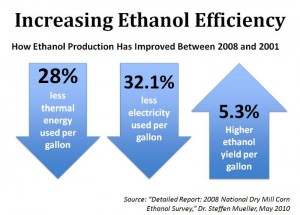 We are officially in the dog days of summer and as such many people are vacationing and that often means lots of driving and time with family.

With all the exposure to gas stations you may have noticed the word ethanol on pumps. It is pretty much everywhere these days as a 10% blend in gasoline and it is increasingly showing up in E85 formulations for flexible fuel vehicles or FFVs.

In fact, GM recently announced their continued commitment to E85 ethanol as “our best near-term solution. In fact, last month, we announced that we’re increasing annual production of Flex Fuel Vehicles (FFV) to more than 850,000 – that’s a 55 percent increase from the 2006 volumes,” said Candance Wheeler, a Gm Technical Fellow.

GM’s  2010 lineup represents the most FFV models on the market, providing drivers with multiple options to fuel their vehicles – E85 ethanol, petroleum, or a combination of the two. And with many new stations opening up, especially in the south and south central regions, it’s becoming easier find a place to fill up.

The latest development is something called a “Blender Pump,” but I like to call it a consumer pump because it allows you to choose what gas or ethanol mixture you want; unleaded gasoline, or 10%, 20%, 30% or 85% ethanol. If you have an FFV you can pick whichever one is the best bargain or  whichever blend works best in your car.

Despite all for proven benefits of ethanol some detractors continue to spread misinformation regarding ethanol fuel. As the attached charts show, ethanol is a great fuel and an even better idea if you believe we should rely more on farmers and less on imported oil from hostile nations.