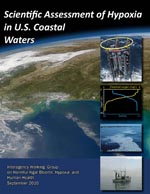 Do any other nations contemplate their navels as much as government and business in America? I know of nowhere else on the planet where people will spend precious time and millions of dollars to do studies related to previous studies. If it does exist, I don’t think I want to move there.

With that observation aside…on to the latest study on Hypoxia and this one happens to be serious in nature, better than many and related to an issue we must understand better. Hypoxic Zones - a condition in which oxygen levels drop so low that fish and other animals are stressed or killed - are often better known in the environmental community and mass media by the stage name of “Dead Zones” for its shock value.

What makes the latest look at Hypoxia interesting is the diverse list of folks involved in the study and several very public observations that would seems to show the wisdom of what many experts have said for years; hypoxia is real, a growing risk, and complex to the point of still largely evading current science.

The study compiled by the National Oceanic and Atmospheric Administration had significant inputs from the Environmental Protection Agency, the Department of Agriculture, the U.S. Geological Survey, and the Virginia Institute of Marine Science. It shows a growing body of thought that climate change is a big factor in these zones, urban contributions are significant and most of the zones are in places with little intensive farming or fertilizer use.

The study provides a comprehensive list of the more than 300 U.S. coastal water bodies affected by hypoxia. This alone is interesting. Much of what the public has heard about hypoxia in the past is related to the dead zone in the Gulf of Mexico and the finger pointers saying agriculture, and specifically growing corn production and fertilizer use, is the culprit. This continues despite static acreage, better soil and water management, and reduced fertilizer use.

The new report at least points out nutrient delivery to coastal waters throughout the nation come from urban and suburban landscapes (golf courses & your lawn), city water treatment sewage discharges and even air pollution. The non-Ag sources get a serious look in this study - and they should - given most of the 300 affected waterways have little corn production or intensive use of commercial fertilizers in agriculture.

“This report makes it clear that there are many causes of hypoxia and that the causes vary based on location of the affected areas. Some are agriculture-related, and many are not. We support further research into all the causes of hypoxia because only then can we seriously develop and implement solutions that are workable and sustainable,” said Darrin Ihnen, National Corn Growers Association president of South Dakota.

One big red flag is the largest and fastest growing zones are in the Pacific Northwest which they are attributing to an emerging link to changing climate. Despite this revelation and better balance than many hypoxia papers, this one still singles our corn and growing demand for ethanol as a key culprit.

The hit on corn overshadows the more interesting findings of the geographic diversity of these zones and the emerging link to climate change. These zones have increased 30-fold since 1960 despite advances in agricultural technology and have been located in many areas of the world where no fertilizer is used. Hopefully, this study will broaden the debate and open some minds on the hypoxia issue.