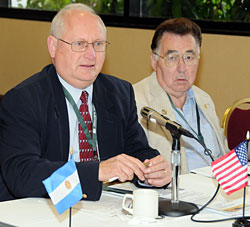 The emcee for the Global Farmer to Farmer Roundtable conducted by Truth About Trade & Technology was Bob Thomson. He says the participating farmers were looking at what it’s going to take to thrive in the next several years. High on their list is modern technology. He says they realize that to feed the projected population equivalent of two more countries the size of China in the next forty years it will take very high productivity agriculture. The alternative will be massive destruction of forests and that will lead to a lot of undesirable results.

Bob says a real concern and frustration expressed, especially by European participants, was the extent that some activist organizations have dominated the debate and how little their governments are doing to help them. It’s hard to be competitive when you’re overburdened by regulations. Participants from countries like India said that biotechnology products will be critical for them. They weren’t so much interested in subsidies as being on a level playing field. A need to communicate their stories was also expressed.

You can listen to my interview with Bob here: