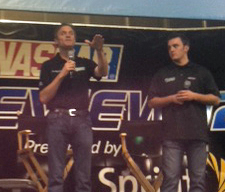 The announcements were made at the NASCAR Preview 2012 event over the weekend in Charlotte, N.C. First of all, American Ethanol announced that it will continue relationships with Richard Childress Racing (RCR) and RAB Racing for the 2012 season. Pictured here are the American Ethanol drivers for the teams. Kenny Wallace (left) will drive the No. 09 Toyota Camry in the NASCAR Nationwide Series for RAB Racing. Austin Dillon, 2011 NASCAR Camping World Truck Series Champion, will drive the No. 3 Chevrolet during the 2012 NASCAR Nationwide Series season for RCR. 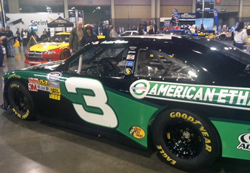 Both drivers are excited about being able to represent homegrown fuel in the NASCAR races. “I’m proud to carry the American Ethanol colors in NASCAR,” said Dillon, who is one of team owner Richard Childress’ grandsons. “I am looking forward to representing American Ethanol, Growth Energy and the National Corn Growers Association.”

Wallace has already been a strong promoter of corn growers and ethanol during the 2011 NASCAR season. “I not only talk about American Ethanol, I truly believe in it,” Wallace said. “I’ve been to the farms, I’ve met the families, I’ve been to the ethanol plants, and I’ve been in the hallways of the U.S. Senate in Washington, D.C., in support of it.” (Listen to a prior interviews with both Wallace and Richard Childress from Farm Progress Show.)

American Ethanol was established by National Corn Growers Association (NCGA) and Growth Energy with NASCAR starting with the 2011 racing season, the same year that NASCAR switched its fuel to Sunoco Green E15. “American Ethanol is getting a lot of positive attention because it’s a good fit for NASCAR’s green initiative, and because of the increased horsepower on the track,” said NCGA President Garry Niemeyer. “Our partnership with RCR and RAB Racing will assure continued success in letting the American public know that if ethanol can stand the stress these drivers put it through, it’s good for the family car, too.” Niemeyer says that research for the first year of American Ethanol found an amazing 71% acceptance rate for ethanol within NASCAR’s 75 million fans.

American Ethanol is looking forward to another big year with NASCAR!