Global Warming: Could Media-Generated Hot Air Be a Cause? 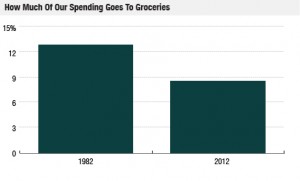 As temperatures across the Midwest soar into the triple digits with little chance for rain or relief in sight, talking heads have started to blabber on again about how the drought will hit consumer’s wallets.  Adding further pain to the heat-induced misery, these armchair economists stoke the fires of already burning financial concerns.

Yelling “fire” in a crowded theater may grab attention and cause alarm, but it is illegal to do so for a reason.  Causing panic for the sake of causing panic does not have a public benefit.

A more cynical commentator might note that it does help drive rating and generate revenue. But instead of focusing on the fray, take a look at the facts.

According to a newly released study from National Public Radio’s Planet Money series, Americans today spend less on groceries than they did 30 years ago, nearly a full five percentage points less.  Prices have declined across the board with some staple items, such as butter and chicken legs, down by 35 percent.  Even a steak costs 30 percent less.

Will a drought impact America’s corn crop this year? Almost certainly.  Does this spell dire circumstances that will leave the grocery consuming public taking out loans to feed their family with healthy, safe food? Almost certainly not.

In today’s America, what is truly in jeopardy is a sense of perspective.  Banners flash before already stressed eyes on the evening news making dire declarations.  Weary from battling real issues all day, these prophets of pain become an echoing chorus of doom drumming away basic sanity.  Frantic feelings froth to a frenzy as the spiral of sustained stress with the prognosticators acting like an emotional succubus that feeds on America’s anxieties.

Stay calm.  It may be hot outside, but cooler heads can prevail.  Calmly, remember that America has the safest, most abundant, most affordable food supply in its history.  The percentage of income needed to eat well has dropped to one of, if not the, lowest level in the developed world.  Through innovation and hard work, farmers prove, time after time, that they can and will feed America, no matter what challenges they face.