Hot? Irritable? Cranky? Imagine Watching Your Paycheck Burn Up Too 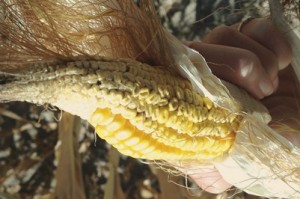 Can you imagine the feeling of waking up in the morning and realizing that it would be 13 months before you got another paycheck? The drought has farm families across the Midwest pondering just that as relentlessly hot, dry conditions turn the nation’s heartland from a breadbasket into an oven.

In a recent story from Voice of America, DuBois, Ill. farmer Alan Bowers Jr. explained what many family farmers in the central and southern Corn Belt feel as they watch the crop that they invested time, sweat and money in this spring wilt.  Blowing away, the corn becomes part of the dust that normally yields the most abundant crop in the world.

Using a simple, yet eloquent analogy, DuBois compared his corn and soybean crop to a paycheck.  Drawing on this common idea, he places in stark perspective how dire the situation facing many farm families may seem.

This candid look at farming stands in contrast to the multitude of mainstream news stories promoting the fallacious idea that farmers do not care about the crop. The emotional toll of seeing hard work wither due to circumstances well beyond human control aside, crop insurance ensures that family farmers like DuBois can make ends meet until the next season.  It ensures that natural disasters do not cause our nation’s agricultural sector to disintegrate.

Crop insurance places exists because Americans value their abundant, affordable, safe supply of food and the farm families who produce it.  Americans understand the integral role these hard working individualists play in the fabric of our national character and in our economy. Maintaining their ability to farm next year when confronted with such enormous, unstoppable obstacles makes sense.  Understanding their frustration in watching the crop slip away does too.