The U.S. Farmers and Ranchers Alliance (USFRA) is nearing its official third birthday and one of the original founding fathers is pleased with the accomplishments of the alliance, which now includes over 80 agricultural organizations and companies. 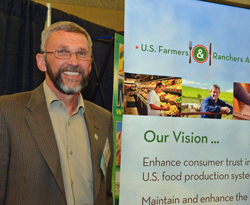 “I don’t know if you ever really reach your goals but think we’re seeing some real strides in the right direction,” says board member Doug Wolf, a pork producer from Wisconsin. “When we sat down to start, we were trying to sit down everybody in one room and get them all to work together and that’s a tough thing to do - but it’s come to fruition and we’re seeing some real progress.”

Among the new endeavors for USFRA is taking its highly successful national Food Dialogues effort down to a more regional level with their affiliates so they can do more of them. USFRA has identified biotechnology and antibiotic use in livestock as two major issues that they are addressing with the non-farm audience. “Those are always controversial issues,” Doug says. “We’re still going to back the science … but we’re up against some really strong emotional responses … but we sit down and debate and discuss how it works.”

There’s also been some recent changes to the USFRA fooddialogues.com website, one of which helps to address some of those hot-button issues, including a new section called FoodSource. They have also incorporated some search engine optimization to the website which brings up USFRA information for certain key words relating to agriculture.

Listen to an interview with Doug and USFRA staffer Lisa Cassady at the Ag Media Summit: USFRA update