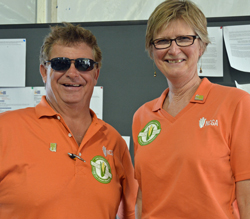 The National Corn Growers Association (NCGA) is out in full force at the 2013 Farm Progress Show, with both president Pam Johnson of Iowa and First Vice President Martin Barbre in his home state of Illinois on site.

They were doing interviews with all the farm media at the show, talking about a variety of topics. We chatted about the condition of the crop - which Pam says is “coming along” in Iowa and Martin says is “better than we’ve ever seen” in southern Illinois.

The farm bill is still a big concern for the corn growers and Pam says they are “not waiting very patiently anymore” for Congress to get the job done. They are strongly encouraging all members to contact their representatives during this August recess and urge them to make some real progress during the few days they are in session during September.

When it comes to membership, NCGA is now over 40,000 strong, which is a lot of voices that can make a big difference. “Our association has shown membership growth every year for the past 15 years,” Martin said. “Makes us feel like we’re really doing our job, really promoting the policy that the members create and making it happen.”

Pam and Martin also talk about the Renewable Fuel Standard, trade, WRDA and biotechnology in this interview.Interview with Pam Johnson and Martin Barbre