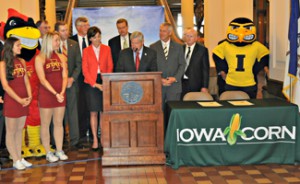 The Iowa Corn Promotion Board is a proud sponsor of the University of Iowa and Iowa State sports teams to educate fans about the importance of corn in their everyday lives and they were thrilled to stand beside the governor, team cheerleaders, and mascots Cy and Herky to celebrate the occasion on Monday.

“We aren’t just celebrating the Iowa Corn Cy-Hawk Series, but we are celebrating both Universities, the coaches, athletes and the farmers who make the partnership work,” said Chris Edgington, a farmer from St. Ansgar and the current Vice President of Iowa Corn Promotion Board.

The official proclamation states, “Whereas, the series salutes the tradition and significant role that agriculture has in the history and the future of our great state; and the series is about celebrating the games, academics, the people of Iowa, and awarding points to the winner in various head to head match ups.”

The Iowa–Iowa State football game on September 13th will launch the 4th year for the Iowa Corn Cy-Hawk Series. No matter which team you back, everyone is a winner with corn!