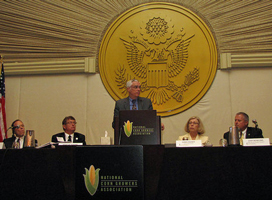 Members of the National Corn Growers Association had a busy week in the nation’s capital last week - hearing from and meeting with administration officials and lawmakers, saying goodbye to retiring industry leaders, and inspiring new young leaders.

I talked with NCGA president Martin Barbre today about what all they did last week and we only scratched the surface. One of the highlights was an update from EPA Deputy Administrator Bob Perciasepe on the proposed Waters of the United States rule. “NCGA is taking the position that yes, we are opposed to the interpretive rule and yes, we think the rule itself needs to be changed immensely, but we want to work with EPA and see if we can’t put our stamp on that to make it better for farmers and still work for the environment,” said Barbre.

NCGA members also wanted to know when they might hear from EPA on a final rule for 2014 volume obligations under the Renewable Fuel Standard (RFS). “The number needs to be out,” Barbre said. “Hopefully it will be good for us when it comes down to it.” 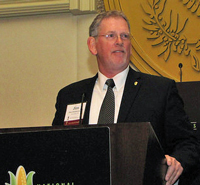 The week in DC also included updates from NCGA action teams and committees on a variety of topics, such as ethanol, biotechnology, government regulation and trade. Delegates also re-elected four board members and elected one new one last week. Re-elected were Bob Bowman of Iowa, Lynn Chrisp of Nebraska, Kevin Skunes of North Dakota and Paul Taylor of Illinois and new to the board is Jim Zimmerman of Wisconsin. Jim is no relation to this Zimmerman, but I did interview him last October at the Truth About Trade and Technology (TATT) Global Farmer Roundtable.

There were quite a few good-byes said to corn industry members who are retiring this year, including Don Hutchens of the Nebraska Corn Board, Marsha Stanton of Monsanto, and Don Borgman with John Deere - as well as NCGA CEO Rick Tolman, who received a special tribute.

Finally, last week graduated the inaugural class of the NCGA DuPont New Leaders Program, which Barbre says included some enthusiastic new young people for the future of the industry.

Check out pictures from the event in the NCGA Flickr photo album.