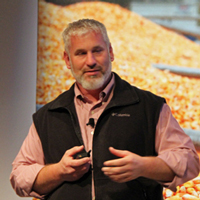 Georgia is a long way from the nation’s Corn Belt, but this year’s National Corn Yield Contest winner Randy Dowdy set a new record of 503 bushels per acre on his farm near Valdosta.

“While the contest does not award a single, national prize or have an overall winner, Dowdy’s accomplishment certainly deserves recognition,” said National Corn Yield Contest Manager Rachel Jungermann-Orf. “We congratulate him on this accomplishment and look forward to seeing further innovation from contest participants over the years to come.”

The Georgia farmer admits he did not know what he was doing so he was all about trying new things. “In 2010 when I entered the (corn yield) contest I made 279 (bushels per acre),” Dowdy says. “The next year, we went in to 350s, the next year 370s, the next year in the 400s. It’s rewarding, I’m thrilled about it, but I still know there’s some things I can do better, so the sky’s the limit.”

Just for comparison, all corn farmers nationwide this year are expected to average a yield of just over 174 bushels per acre - which is also a record.