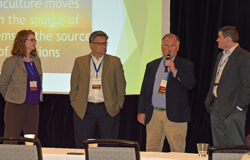 Fred Yoder is an Ohio corn farmer who believes sustainability is more than a buzz word. At the Corn Utilization and Technology Conference Yoder talked about his involvement with Climate Smart Agriculture, a term coined to describe just what it is growers will have to do to feed 9 billion people while working with what we’ve got. Working with the climate, Yoder explains, means adapting to changes, taking the bad weather with the good and figuring out how to use that to make farmers more productive.

More productive, it turns out, is often the same as more economical. Climate Smart Agriculture is founded on three main pillars; more productivity, adaptation and resilience, and reducing greenhouse gas emissions. When Yoder began his own journey in sustainability he said it started with conservation tillage and cover crops to become more productive. By adapting his practices with grid sampling and variable rates he began to see that the economics were leading to a reduction in greenhouse gas emissions on his farm.

Yoder notes that it takes leaders to make farming more sustainable. “We need leaders to get out there and try it,” he says. “Every farmer ought to be trying something on the back forty that he is not necessarily comfortable with, but just try it. Most of the time it works better than he thinks.”

You can listen to Chuck’s full interview here: Interview with Fred Yoder