Bill Gates Gets into Farming 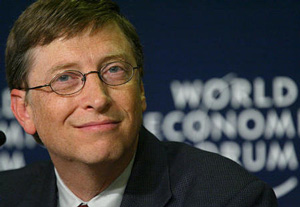 In the spirit of “teach a man to fish,” the Bill & Melinda Gates Foundation announced Friday that it would greatly increase agricultural grants designed to reduce hunger and poverty in Africa and South Asia.

“If we are serious about ending extreme hunger and poverty around the world, we must be serious about transforming agriculture for small farmers,” Bill Gates, co-chairman of the foundation, said at the World Economic Forum in Davos, Switzerland.

Gates said he regretted that support for agriculture in the developing world had been relatively neglected by his foundation but noted that it is a critical tool to drive development in rural areas.

It’s refreshing to see that kind of talk and action. All too often American do-gooders tend to take the “give a man a fish” approach and feed him for just a day. This kind of financial support has the potential to really make a difference by giving a hand up instead of just a hand out.

While the French were busy banning the production of biotech corn last week, their neighbors to the south were importing more US corn than they have in almost a decade.

The U.S. Department of Agriculture’s Foreign and Agricultural Service reports that the United States sold 2.5 million bushels of corn for shipment to Spain the week ending January 11 - the first of this magnitude to Spain since 1998-99, according to U.S. Grains Council officials who say biotechnology has been the primary trade barrier causing Spain not to seek U.S. corn.

“Because the tight supply of feed grains has feed millers and producers in a severe price squeeze, the timing is right to try and educate the European Union’s grain industry about biotechnology and elicit their support in addressing policy,” said Dale Artho, U.S. Grains Council chairman. “They were especially receptive to the idea of relaxing the EU GMO (genetically modified organisms) policies for U.S. corn. We discussed how corn with plant technology attributes could be utilized in their milling process for feed export markets and how that would reduce the pressure on their domestic markets.”

Artho said Spain’s purchase of U.S. corn is a good sign that the Council’s education efforts are working and gives U.S. producers reason to be optimistic about the potential to export genetically enhanced feed grains to Europe.

Activists Get Their Way in France

When European activist wackos act like spoiled children, they get their way.

“It does not mean that France does not participate in GMO research,” Sarkozy said. “It simply means that with the principle of precaution at stake, I am making a major political decision to carry our country to the forefront of the debate on the environment.”

Credit for the decision can be given, at least in part, to a high-profile activist who went on a hunger strike January 3 to demand a year-long ban on GMO crops. Anti-globalization activist and farmer Jose Bove has been on a rampage against GMOs, and even “been convicted of ripping up GM crops in southern France.” Sounds like a spoiled kid to me.

The decision was welcomed by Greenpeace activists, more spoiled children who in March dumped a ton of GMO corn at the door of Sarkozy’s campaign headquarters in Paris. (Question: Where did they get it? Did they grow it themselves, buy it - or rip it up out of someone’s field?)

During the campaign last year, Sarkozy’s opponents both said they would back a moratorium on GMO corn, while Sarkozy said he was “skeptical about the real benefits of GMOs” but that open-field crop trials should continue for research purposes, to keep open the option of using GM crops “once all safety conditions have been met.”

This week, after a controversial report that indicated a few scientists thought MON810 might have a negative impact on wildlife, Sarkozy enacted the ban by invoking “a safeguard clause” which allows a member state of the EU to refuse the sale of a product permitted across the 27-nation bloc.

Green Party French farmers like Bove (pictured on the right in the media spotlight) are pleased and eating again, but the head of the country’s largest farmers union called the announcement “surprising and shocking. The decision was very political to please a number of people including some on a hunger strike.”

Last year, Monsanto’s 810 corn made up less than one percent of all the corn grown in France. The president of AGPM, a French association of corn growers, said that France can survive without GMOs, “but it means we will protect our crops solely by chemical means and take the risk of depending on more imports in the future.”

Meanwhile, Monsanto will consider all of its options, including legal remedies. Monsanto spokesman Jonathan Ramsay said, “Monsanto will defend our customers’ right to choose.” So, it’s not over yet, but it still sends a message to wackos that hunger strikes, tearing up crops and dumping corn on the street gets them their way.

Ethanol trade association leaders from the United States, Canada, Europe and Brazil got together last week at the F.O. LICHT´S World Ethanol 2007 conference in Amsterdam and united against a common enemy - the United Nations … at least the recent interim report issued by United Nations Special Rapporteur on the Right to Food, Jean Ziegler and some choice comments like calling biofuels production a “crime against humanity” and a “recipe for disaster.”

In a letter to United Nations Secretary General Ban Ki-moon, the heads of the Renewable Fuels Association (RFA), the European Bioethanol Fuel Association (EBIO), the Canadian Renewable Fuels Association (CRFA), and the Brazilian Sugar Cane Industry Association (UNICA), detailed some specific concerns the world ethanol industry has about the assumptions and conclusions made by Mr. Ziegler. Specifically, the groups pointed to the economic and environmental benefits ethanol provides that Mr. Ziegler has marginalized or ignored completely. Moreover, the letter also details some of the more immediate factors limiting the availability of food in some regions of the world.

The report ignores the fact that food prices have increased far less than petroleum prices. Over the last three years, when biofuels gained momentum, agricultural prices have gone up by 7% while oil prices jumped by more than 70%. In fact, the sharp increase in oil prices is largely responsible for the increase in food prices.

Mr. Secretary General, we urge the United Nations to review the Interim Report of the Special Rapporteur on the Right to Food with a focus on sound science, credible studies, and a comprehensive view of the biofuels sector
rather than unsupported assumptions and selected anecdotes. We stand ready to participate in this revision process. Specifically, each signatory to this letter plans to submit additional comments and recommendations to the Special Rapporteur to address specific inaccuracies and concerns regarding its policy recommendations.

Last week, leaders of the four organization issued a joint statement on the necessity of developing a robust and vibrant renewable biofuels industry around the globe, which concluded:

“Through cooperation and technology, we can responsibly and sustainably increase the production and use of renewable fuels and encourage others to take the essential first steps toward a more secure and stable energy and environmentally-sensible future.”

United Nations “Expert” Has Some Explaining To Do

I don’t know what you think of the United Nations but I can tell you what I think of their “independent expert on the right to food” Jean Ziegler, which is not very much. The guy’s got some serious explaining to about some outrageous statements he made public. The big one is his claim that food crops for biofuels are a “crime against humanity.” Okay Bud what are you thinking? Here’s a link to the story on AP.

NCGA is rightly incensed by this and their CEO, Rick Tolman has some words on the issue.

Tolman said if Ziegler were citing facts on biofuels and corn he would know the United States is harvesting 13.3 billion bushels of corn — more than enough to help meet the needs of global hunger, offset petroleum use, provide a nutritious feed for livestock and have more than an adequate corn supply on hand.

“It is a travesty when an official makes public statements that are so irresponsible, so inaccurate and so inappropriately damning,” he added. “The statements ‘crime against humanity’ and ‘catastrophe of the massacre (by) hunger in the world’ are not to be used lightly or in such an irresponsible manner. If this is an example of how Mr. Ziegler carries out his responsibilities, he should resign his post immediately. Hunger is not something to trifle with and those in positions of responsibility need to be accountable in their statements.”

Well said Rick. If you’d like to listen to the story in the United Nations own words then here you go: