On Thursday, the South Dakota Corn Utilization Council (SDCUC) and the Ethanol Promotion and Information Council (EPIC) launched a blender pump program aimed at helping gas station retailers in the state obtain funding and the equipment needed to sell blends of ethanol ranging from 20 to 40 percent to be used in flex fuel vehicles.

EPIC Director of Operations Robert White said South Dakota is the perfect place to launch this new program. “South Dakota is where the blender pump movement started and we are happy to partner with the corn producers there to get this initiative off the ground,” said White.

“The two largest ethanol companies are here, people in South Dakota are highly educated about ethanol and our goal is simply that we need to figure out we can use more product and we need to give consumers the choice and the blender pump does just that,” Richardson said.

There are currently about 20 blender pumps in the state and the goal is to install a minimum of 100 new blender pumps over the next year.

Missouri Motorists Save With Ethanol

The Missouri Corn Merchandising Council held a press conference at the state capitol on Monday to announce the results of a new study showing that Missouri motorists are saving money at the pump thanks to ethanol.

The “Impact of Ethanol on Retail Gasoline Prices in Missouri,” study, performed by John Urbanchuk, found that drivers in Missouri are expected to save an average of 9.8 cents per gallon due to the 10 percent ethanol standard that went into effect Jan. 1, 2008.

According to the Energy Information Administration (EIA), Missouri drivers used over 2.9 billion gallons of gasoline in 2007. With nearly a dime a gallon difference, using ethanol-blended fuels translates to statewide savings of more than $285 million dollars in 2008.

Missouri Corn board member Terry Hilgedick says the study confirmed what they had already believed. “It pointed out that ethanol is a bargain for consumers, they are saving about 9.8 cents per gallon at the pump due to just the Missouri law.”

Hilgedick notes that the study does not factor in the increasing use of biofuels like ethanol that are helping to extend gasoline supplies and hold retail pump prices down. According to Merrill Lynch commodity strategist Francisco Blanch, U.S. gas prices would be 15 percent higher without the increasing effect of biofuels. Without ethanol, the price at the pump would be $3.70 a gallon instead of the recent average price of $3.25 a gallon.

Listen to an interview with Terry here:

Radio Iowa did a story today on corn and food prices allowing the Iowa Corn Promotion Board to tell the real story.

Julius Schaaf, chair of the Iowa Corn Promotion Board (ICPB) says those who say corn prices at “record” highs should get the facts straight.

Schaaf says when you look at the price of corn in past years, there were times when corn got over three-dollars a bushel - and when plotted against the rate of inflation — that equates to over seven dollars a bushel. “So in real dollars, you can’t say that we’re setting record prices,” Schaaf says, “one thing you can say is that we’re setting record prices with oil, when you plot that (oil prices) against the inflation rate, we are setting records.” He says for example: in mid-1984, corn at the farm gate sold for $3.05 a bushel in Iowa, but it would take $6.27 in today’s dollars to equal that.

Schaaf also notes that transportation and packaging are really driving up the cost of the food.

Congrats to Iowa Corn and Radio Iowa for telling “the rest of the story.”

While the oil industry has been quick to blame corn ethanol and grain prices for high food costs, they fail to recognize the profits of their own companies are the bigger culprit of high food costs, according to the Nebraska Corn Board.

“Farmers have been taking it on the chin while oil companies are raking in record profits,” said Don Hutchens, executive director of the Nebraska Corn Board.

Exxon alone had profits of $40.7 billion last year, while the five leading oil companies had a combined profit of $123 billion. Ironically, the entire U.S. corn crop for 2006-07 had a gross value of $32 billion, and only 20% of that crop was used to produce ethanol.

“When you compare the profit of one oil company last year to the total gross value of an entire year’s U.S. corn crop, you can quickly understand why Congress is asking oil company executives to explain why their profits are hitting record levels while the American consumer pays for those profits at the pump and supermarket,” said Hutchens. “The oil companies are also fighting to keep $18 billion in tax breaks over the next decade.”

Hutchens said they were interested in hear what the oil companies had to say about renewable energy during a Congressional hearing held on Tuesday. “Our perspective is that they have not shown much support and have in fact tried to shift the blame of subsidies and high food costs to the American farmer,” Hutchens said. “In reality, the American farmer has worked hard for the last 30 years to show the benefits of a renewable energy source like ethanol.”

Celebrity dancing racer Helio Castroneves and former NASCAR champion Rusty Wallace visited with Iowa corn growers and members of the media on Wednesday to promote the Iowa Corn Indy 250 on June 22 at the Iowa Speedway in Newton.

There was no dancing, but Helio did sing the praises of ethanol. “It’s great,” he says. “The IndyCar Series is the one that started 100 percent on ethanol and other series are following as well. I’m very proud to be part of this organization. And ethanol is the main sponsor, we’re here because it’s where they produce ethanol.”

Helio is a two-time Indy 500 winner, but he gained new celebrity as the current “Dancing with the Stars” champion, and he hopes that will also gain new fans for the IndyCar Series from the 22 million people who tuned in to that show. “The funny thing is now, before doing the show I was a driver that can dance, and now I am a dancer that can drive,” he joked.

Besides being former NASCAR champion, Wallace is also an ABC/ESPN commentator, and designer of Iowa Speedway. This will be the second year for the ethanol-fueled race at the new speedway. The premier Iowa Corn Indy 250 last year was the second-most watched IndyCar Series race after the Indianapolis 500. This is also the second year that the IndyCar Series will run on 100 percent fuel grade ethanol.

The Missouri Corn Growers Association is celebrating 30 years of success, and this past year was one of the most successful ever for the organization.

MCGA president Mike Geske, a producer from Matthews, outlined the many successes they were able to celebrate, from full funding of the state’s Ethanol Incentive Fund, to passage of WRDA on the national level, to the profitable price of corn.

In recognition for his support of renewable fuels, corn growers and the agriculture industry in general, Geske presented Missouri Governor Matt Blunt with this year’s President’s Award. This is the second year in a row that Governor Blunt received that award from the MCGA and the first time anyone has been a two-time recipient of the organization’s highest honor.

“With our support for renewable fuels and the leadership of the Missouri Corn Growers, our state has become a leader in ethanol production,” Blunt said.

The governor also told the growers that we should all be proud of the higher prices they are getting for their commodities these days. “We shouldn’t apologize that we have a good, fair price for corn and soybeans, that’s something we should relish,” he said.

Missouri corn growers are reminding residents - and lawmakers - in the capital city of Jefferson that ethanol is helping the state’s economy.

According to a University of Missouri economic impact study, ethanol production in Missouri is expected to reach 350 million gallons annually by the end of 2008. This growth would create 5,613 jobs, generate $63 million in tax revenues and inject an estimated $726 million into the state’s economy.

Important information, but not quite the emotional punch as the billboards they did two years ago with state president Terry Hilgedick and a former king of Saudi Arabia. Caused a nice little stir and they got some good publicity out of it, not to mention the fact that it did help get the ethanol standard passed, which went into effect on January 1.

Six state corn grower organizations have issued a joint-statement saying that “a farm bill without an optional “revenue-based” safety net is little better than no bill at all.”

The state corn association of Illinois, Iowa, Indiana, Ohio, Maryland and Virginia say that the key elements of a revenue-based system include being based on market prices, being exclusive of other programs, and being designed to activate on need. There should also be the ability to negotiate direct payments and state and county triggers should be used rather than a national trigger.

The effort to merge old and new ideas has led to a startling gap in both the House and Senate farm bill proposals, according to state corn leaders. The disaster aid component being offered to fill this gap is insufficient and risky and seems to show little regard for the corn industry, a key economic driver for the nation.

The groups state that the country needs a program that provides assistance when it’s needed most, not one that is in place because it’s always been done that way. 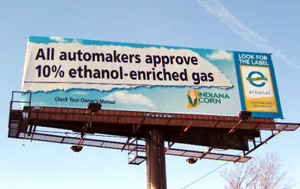 The Indiana Corn Growers Association is helping to promote biofuels awareness in their state in a number of ways.

One is a billboard and radio campaign in major Indiana cities aimed at informing consumers that all automakers approve the use of 10 percent ethanol-enriched fuel. “Consumer feed back is showing that consumers still don’t believe ethanol is good for their cars, said Mark Walters, biofuels director for Indiana Corn and Soybean. “So, we are using this first phase to show that automakers do approve ethanol and you can fill your car up with ethanol.”

As this campaign progresses, they will urge consumers to ask retailers if they are selling ethanol and make a push for E85 and flex-fuel vehicles. The Indiana Corn Growers have partnered with the Ethanol Promotion and Information Council (EPIC) on the campaign.

Indiana Corn is also working to gain support for a Biofuels special recognition license plate to be made available through the Indiana Bureau of Motor Vehicles.

The Biofuels license plate will promote both ethanol and soy biodiesel as Indiana-grown renewable fuels helping to move the state forward and will cost drivers between $25 and $40. 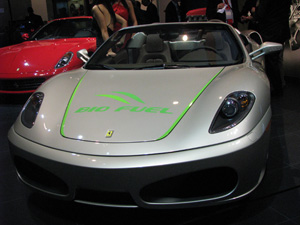 It’s all about being flexible at the 2008 North American International Auto Show (NAIAS) in Detroit - flexible fuel, that is.

Take Ferrari, for example. The Associated Press picked up on the story that Ferrari is experimenting with ethanol to help its luxury sports cars produce lower emissions and improve fuel economy.

Ferrari said Monday it developed an engine for an F430 Spider to run on E85, an 85% ethanol blend. The automaker said it produces 5 percent less carbon dioxide emissions and boosts horsepower by 10 percent.

There are lots of other new flex-fuel vehicles at the show. The Illinois Corn Growers reports that “the David and Goliath of the flex-fuel war being waged at the event had to be the concept cars introduced by Hummer and Saab.”