Congress voted to override the presidential veto of the Water Resources Development Act, or WRDA, because it authorizes funding for water projects from coast to coast, but the centerpiece of repairing locks and dams on the Mississippi River was the main concern for corn growers.

“When it comes to this issue, nothing has been easy,” said NCGA President Ron Litterer. “After almost two decades of work by corn growers, millions of dollars spent on studies, seven years of waiting on the legislative process, a presidential veto and then a veto override by the U.S. Congress, we finally have achieved authorization to modernize seven locks on the Upper Mississippi River System. Once again, our grower members demonstrated their influence and commitment to the Water Resources Development Act by contacting their members of Congress and urging them to overturn the president’s veto.” 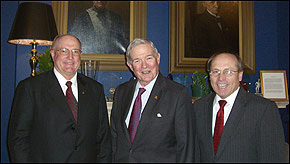 Litterer celebrated the victory this week with NCGA First Vice President Bob Dickey and Senator Kit Bond of Missouri who is credited with his perseverance in getting the legislation finally passed.

Missouri Corn Growers Association CEO Gary Marshall says, “No one deserves more credit for this bill becoming law than Senator Kit Bond. We owe him our sincere thanks for his vision and determination to see the locks and dams on the Mississippi and Illinois rivers upgraded.”

“These upgrades will spur economic growth for mid-America and will certainly go a long way towards improving access to world markets,” said Missouri Corn Growers President Mike Geske. “Our competitiveness in global trade has become much greater today due to the WRDA bill finally becoming law. We will now work with our Congressional delegation to see that funding is also approved.”

“Iowa’s corn growers should really celebrate this achievement,” said Warren Kemper, a grower from Louisa County and long-time advocate for improving the river’s infrastructure. “The ICGA has been lobbying for lock and dam improvements for more than a decade. WRDA is important to farmers who depend on the inland waterways, but it is also important to the whole economy of the upper Midwest.”

“It’s taken nearly two decades of work by corn growers and a consortium of other trade groups nationwide, as well as millions of dollars in studies, to finally authorize work to repair and modernize seven locks on the Upper Mississippi River System,” said Wisconsin Corn Growers Association President Tom Novak. “While we’re glad legislation finally passed, we still have a great deal of work to do to ensure the work it authorizes is properly funded.”

Even though President Bush vetoed WRDA citing the cost as the reason, the bill actually only authorizes the projects and opens the way to appropriate the funds needed to replace the locks. Once the money is appropriated it will still take more than 15 years to replace the 70-year-old locks that are falling apart.