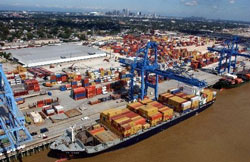 As the battle to contain the oil spill in the Gulf of Mexico are now likely to stretch into the fall, concerns are being raised that the situation could delay grain exports, according to Iowa State University grain markets specialist Chad Hart.

“If the oil slick got into what is called the Southwest Passage – which is a canal that goes from New Orleans out to the Gulf of Mexico – we would be looking at severe delays in getting our corn and soybeans shipped overseas,” said Hart.

There are some reports coming out of the Port of New Orleans that indicate vessels that would normally dock in New Orleans are diverting to other Gulf Coast ports, but authorities say only one of 600 ships that have come in since the spill had to be cleaned.