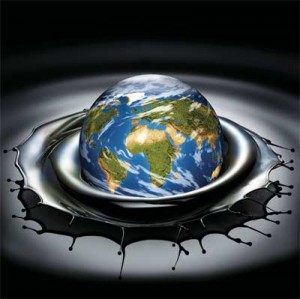 In our recent series discussing ethanol a lot of the information has been more philosophical in nature and has focused on some of the critics and their motivations. The idea was to get you thinking in a skeptical way rather than beat you up with statistics. That ends with this installment which will discuss petroleum. (Skip to the end for the stats).

Black Gold, Texas Tea, or carbon crack…at the end of the day there is a reason they call it crude.  Even in its refined form it remains crude. This stew of dead, decayed plants and animals we call oil is nothing but another anachronistic fossil fuel that is little removed from cavemen rubbing sticks to keep us warm.

We may have become highly technical and efficient in finding oil and getting it out of the ground but the final product remains, well…crude.

Over the years more than 200 ingredients have been put in gasoline to try to make it burn better, make your engine knock less, and sometimes just because it was a convenient way to make unpleasant chemical waste products from the petroleum industry disappear out your exhaust pipe.

And all of us gonzo gas mavens would ignore the obvious imperfections and hideous social costs because it was abundant, cheap and made our powered toys sing. Cars, boats, motorcycles, weed-whackers, generators, power washers, etc…..Yikes, the list does go on.

Today, I would gladly trade in my heated seats, directional headlights, and GPS for a modern fuel (hopefully domestic) and new engine technology that moves us away from the oil-fed internal combustion dinosaurs we depend on today.

If we can have cell phone technology that changes daily, digital television technology sharper than the human eye can even see, and tractors that steer themselves we surly should be able to market a functional, fuel efficient and more environmentally friendly car that runs on a cleaner, renewable fuel source.

A recent Bloomberg article points out fossil fuels like oil receive 10 times the advantages around the world as non-polluting energy sources. In 2008, fossil fuels received $557 billion compared to $45 billion for renewable energy sources.  (Hey, aren’t these oil guys consistently in the fortune 100 companies?)

It might be time to re-balance who gets these energy “favors” in order to propel a transition from oil and other fossil fuels to a new generation of more sustainable, cleaner fuels.

Our dependence on imported oil grows daily and the geopolitical consequences hover about us like a turkey vulture reunion. Yet we continue to compound the mistakes of our past, take the path of least resistance, and let Big Oil and their vast resources dictate our futures.

Now let the numbers speak for themselves:

We import 12.9 million barrels of oil per day, which make up nearly 60 percent of U.S. oil consumption at a total direct cost of roughly $300 billion per year.

The U.S. consumes 1/4 of the annual global production of oil, but our country produces only about 10 percent of the global supply.

The OPEC cartel provides 1/3 of our imports via four supertankers per day.

It costs us $100 billion a year for the military to protect the maritime straits of the Middle East. (Over and above what you pay at the pump)

Every dollar spent on encouraging the development and infrastructure for ethanol has been returned many times over in terms of jobs; farm program cost savings and lower cost fuel for consumers. Compare the true cost of oil including billions of dollars in tax breaks and subsidies going back for three generations and ethanol is a bargain. And we make it here in the U.S.