New Way to Help Chickens Cross to the Other Side 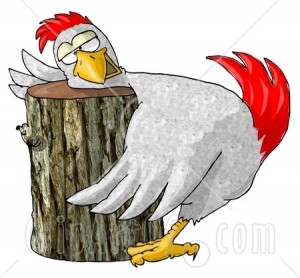 Years ago I wrote a blog asking what “happy chicken” tastes like. It was in response to a small but growing number of people who preferred free range chicken. The theory being that it was more humane letting them roam and fend for themselves than living in a building or in a cage.

Funny thing is that chickens have a pretty strong menu avoidance mechanism. In much of farm country free range chickens are referred to as coyote hors d’oeuvres. Most are smart enough not to wander to far from people and they head for the chicken house before dark because of the aforementioned coyote and or fox. And truth is we can’t feed a hungry world with these old school methods.

The stress is eliminated by a new process that puts them to sleep with carbon dioxide prior to slaughter. My immediate reaction was to think of about three inappropriate jokes/references but then I read further to see that Temple Grandin, a renowned professor of animal science at Colorado State University and a prominent livestock expert,  helped design the system.

There are other experts who note most of the time people don’t want to think about where their food comes from or how the animal was killed which may in itself be a problem. In fact those opposed to animal agriculture use this as a tool to shackle and inhibit the industry. They show video footage of inhumane examples of animal treatment and slaughter that are not the norm.

The same experts argue to fight back in this image war we should show consumers a real farm, a real high-tech and modern slaughter facility. Research does show that this kind of exposure might make someone stop eating hamburgers or chicken but they get over it in a matter of days. Afterwards they get inoculated to future attempts to shock them by these animal rights groups.

This I do know; with few exceptions livestock from hogs to chickens are cared for well and humanely. Many live in climate controlled environments, they see a doctor/vet more than I do, and humane husbandry is the rule. This too I know; if our trend towards food with lots of adjectives describing it continues you will pay lots more for food.