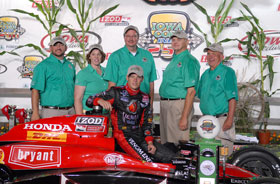 This year was the 5th year for the race, sponsored by Pioneer, with support from the Iowa Corn Promotion Board (ICPB) and the Iowa Corn Growers Association (ICGA). ICPB chairman Dick Gallagher says this year the race was all about going green. “We’re very proud to be able to show that (ethanol) is a renewable fuel, a green fuel and that’s what we need to be promoting more because our dependence on foreign oil is too much,” he said in an interview with Chuck Zimmerman.
Dick Gallagher Interview

Chuck also talked with incoming ICGA president Kevin Ross who says the Iowa Corn Indy 250 had been “a huge event” for corn growers. “It’s a great showcase that we can use not just in our state, but nationwide and even worldwide,” he said. “It’s a great venue to get our message out about the great things that Iowa corn growers are doing.”
Kevin Ross Interview

Indy has been using 100% ethanol for over five years now and during the post-race press conference, Chuck asked Mario his thoughts on racing in front of 2,500 corn growers and using fuel they grew. “I think it’s great we can be green and still have performance,” Mario said. “We’re thankful to have their support. I love this place. Iowa’s great.”
Marco Andretti Ethanol Comments

Even Indy and NASCAR driver Danica Patrick had nice things to say about ethanol. “I think that we’re in definitely in an age where everybody is doing what they can to take care of this wonderful world we live in,” Danica said during a pre-race press conference. “Ethanol is definitely something that has been a real presence in IndyCar years ago to NASCAR now. It’s really great.”
Danica Patrick Ethanol Comments