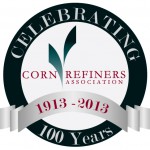 As we noted in a previous post, this year marks the 100th anniversary of the Corn Refiners Association (CRA) and what a sweet century is has been!

“We’re very proud of having been around that long to serve the interests of our industry,” said CRA Director of Communications David Knowles during the recent NAFB Washington Watch event. “The corn refining industry actually goes back about 170 years,” he noted.

According to the CRA website, corn refining began in the United States around the time of the civil war with the development of the process for corn starch hydrolysis. Prior to this time, the main sources for starch had been wheat and potatoes. In 1844, the Wm. Colgate & Company wheat starch plant in Jersey City, N.J., became the first dedicated corn starch plant in the world. By 1857, the corn starch industry reached significant proportions in the U.S. Starch was the only product of the corn refining industry. Its largest customer was the laundry business. Today, corn is used for not only starches, but a whole host of other products such as sweeteners, fuel alcohol, oil, and bioproducts. “We’re really proud of the technological innovations that have taken place over the years to improve people’s lives,” David says.

The attacks on high fructose corn syrup (HCFS) in recent years presented the industry with a public relations challenge that they have met with an educational campaign started about five years ago to provide people with information about high fructose corn syrup. “Mainly that it’s nutritionally the same as sugar, is not uniquely responsible for any types of diseases and that sugars and all calories should be consumed in moderation,” said David, noting that their market research has shown the campaign, which includes the SweetSurprise.com website, has made an impact.

David says the industry is as strong as ever and looking forward to another sweet century ahead.