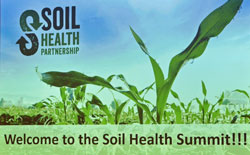 The Soil Health Partnership (SHP) was officially launched at last year’s Commodity Classic so it will just be one year old in another month. But Nick Goeser with the National Corn Growers Association (NCGA) says the concept had a relatively long gestation period.

“The idea for the Soil Health Partnership started in 2011, so within three years we came to the point where we could launch it and it’s been great,” Goeser said during the first Soil Health Summit in St. Louis on Thursday which included farmers, agronomists, and organizations involved in the effort. 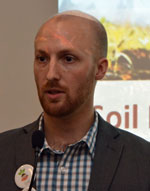 The farmers at the summit are among the 20 in six states that have made a five year commitment to the project. “The farmers are early adopters and innovators in the area of conservation management,” Goeser explained. “They agree to enroll a 20 to 80 acre field on their farm and allow us to collect soil samples to update our recommendations to farmers.” In addition, the demonstration farmers agree to host field days as part of the project.

NCGA is the administrating organization in the SHP, which was set up with funding from Monsanto and The Walton Foundation, but in the last year the partnership received a Conservation Innovation Grant from USDA-NRCS that has provided additional funds.

Listen to Nick explain more about the SHP in this interview: Interview with Nick Goeser, NCGA Soil Health and Sustainability Manager