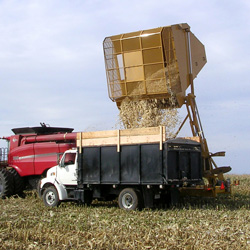 Corn cobs aren’t just for pipes anymore. Now we’re seeing some real interest in utilizing them for a variety of purposes and for farmers that could mean extra income. You might think cellulosic ethanol production first but look at this list of other uses for cobs:

Harvesting corn cobs take some specialized equipment like this new cob harvester from Vermeer. It’s actually a system that tows behind a corn harvesting combine to collect and unload the cobs.

Farmers today are becoming more and more efficient and finding ways to better utilize our natural resources including the ones they grow.

Frito-Lay has announced a new packaging initiative that’s a chip off the old chip.

Starting next year, all Frito-Lay multigrain SunChips (which are made with whole corn) will come packaged in the first fully compostable snack chip bag made from plant-based materials - that is, corn-based. According to the company, “the change is designed to significantly improve the environmental impact of its packaging.”

This month, the SunChips brand is taking the first step towards this transformational packaging. The outer layer of packaging on 10 ½ oz size SunChips snacks bags will be made with a compostable, plant-based renewable material, polylactic acid (PLA). By Earth Day 2010, PepsiCo’s Frito-Lay North America division plans to rollout a package for its SunChips snacks where all layers are made from PLA material so the package is 100% compostable. They even have a video on their website of the bag decomposing.

In addition, at a time when other food companies are keeping higher prices from last year intact, Frito-Lay recently began to add 20 percent more product into its take-home sized Doritos, Tostitos, Cheetos and Fritos products, without increasing the price.

But wait - there’s more! On Earth Day this week, PepsiCo’s Frito-Lay and National Geographic announced the launch of the Green Effect, a national initiative that encourages consumers to take their own small steps toward helping the planet. Consumers can submit their ideas on how to make their communities greener, for the chance to win one of five $20,000 grants that will help turn their green ideas into reality.

According to news release, the Green Effect initiative is the second collaboration between Frito-Lay, a division of PepsiCo, and National Geographic. “Earlier this year, Frito-Lay and National Geographic teamed up to create a unique editorial supplement entitled, “Solutions for A Better World: A Lighter Footprint.” The supplement, which was polybagged with National Geographic magazine, detailed the world’s current dependency on fossil fuels and delves into the realities of alternative solutions including; solar energy, wind power, biofuels, recycling and water conservation.”

So munch a bunch of Frito’s SunChips today and feel good about it!

Corn is Better for Baby Bottoms

What could be better for baby - or Mother Earth - than kinder and gentler diapers made from corn?

Corn-based diapers have apparently been around for a couple of years now, first made by a Swedish company called Nature Baby Care, but they are getting a bit more buzz lately. If you search around on the web, you will find a number of different brands of eco-friendly diapers and other websites specializing in places to find them - like Better Baby Bums, for example. You gotta love that name!

According to BBB, the Nature Baby Care diapers were “the first ECO-friendly high-performance diaper, based on new green technology, protected by a Swedish patent. The diaper is soft, thin, comfortable and with perfect sizing. It’s performance is as good as the best ”traditional” diapers. It has an exclusive 100 % chlorine free absorbent material and the material against the baby’s skin is based on corn instead of plastic like traditional diapers, 100% compostable, breathable and extremely kind for the baby. The packaging is 100 % compostable and based on corn.”

Then there are companies like Earth Baby, based (where else?) in California, which offers “compostable diaper service” utilizing corn-based diapers. They claim they have composted over 9,600 pounds of diapers to date - turning them into nutrient-rich top soil in as little as 14 weeks.

It gives new parents another alternative to cloth or traditional disposable diapers - and corn farmers a new use for their product!

The next big new use for corn could be on a roll. 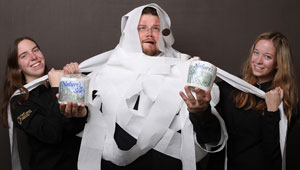 “We were sold on the idea of Nature’s Silk from the beginning,” said Osborne, a senior from Evansville, Ind., double-majoring in cell molecular development and genetics. “The idea is simple, but perfect. We couldn’t figure out why this product wasn’t already on the market.”

The other big winners in this year’s competition at Purdue to create new products out of corn and soybeans were soybean-based cupcake liners and biodegradable cork that can be made of both soybeans and corn. The competition drew a record 33 students on 12 teams—nine of which competed in both corn and soybean categories.

“The participation in both the corn and soybean competitions this year was outstanding,” said Mark Henderson, executive director for both the soybean alliance and corn marketing council. “Developing new uses for our crops, as well as building interest among students to work with both corn and soybeans, is essential in building demand for the crops. This is a top priority for our state’s corn and soybean checkoff programs.” 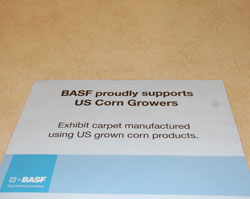 Some exhibitors at the Commodity Classic not only have new products to help corn growers be more productive, they also are showcasing new products made from corn.

Take the BASF booth, for example. They are showcasing a carpet in their exhibit made from corn polymers, and giving away plastic coffee cups made from 100 percent corn plastic, as Dan Westberg and Leon Duschene explain in this YouTube video.

“We’ve used these grants in the past for ethanol plant feasibility studies, a pilot project to turn PLA into milk bottles, marketing and business plans on distillers grains use as fertilizer, a project to test burning corn gas in corn dryers, and legal work to evaluate permits for livestock operations,” said Jerry Main, a grower from Fairfield and chair of the ICPB’s industrial usage committee.

Both new and established ventures are eligible for grants to pay for feasibility studies, business plan development, marketing plan development, engineering studies, legal fees and equity drives. Recipients can receive up to $25,000 on a 50-50 matching basis.

The application form is available on-line at the ICPB site. Completed applications will be evaluated by the Iowa Corn Industrial Usage & U.S. Production Committee, which will score them on criteria that include technical factors, business factors, management, potential economic impact on Iowa, viability, and risk. 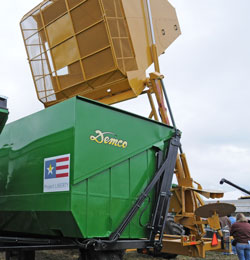 The new Vermeer corn cob harvester announced this week by the company was on display earlier this month at the cob harvesting event sponsored by POET at project LIBERTY in Iowa.

The harvester is towed immediately behind select corn harvesting combines to collect and unload the cobs. While the main idea here is to harvest the cobs for cellulosic ethanol production, the company points out that there are many other uses for corn cobs, such as livestock feed supplement for mixed
rations, livestock and pet animal bedding, blending cobs with coal to co-generate electricity, gasification to create several types of energy for industrial processes and other industrial applications including
construction materials, abrasives and absorbents.

Biodegradeable bottles made from corn are greening up the U.S. House of Representatives. 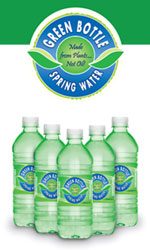 As part of the Green Capital Initiative, “Green Bottle Spring Water” from a company called Naturally Iowa will now be the only bottled water available in the US House Cafeteria. The bottles are made out of polylactic acid (PLA), a biodegradeable plastic made from corn. The bottles can be composted, incinerated, or ground up and used again. The Cafeteria has access to a well-developed industrial compost system developed by the United States Department of Agriculture. The composting material is sent daily to the facility in nearby Maryland to go from trash to topsoil in less than ninety days. 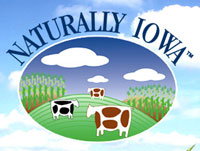 The slogan for Naturally Iowa is “We Milk the Cows and Grow the Bottles.” Co-founders William Horner and Steve Williams both grew up on farms in Southwest Iowa, and later returned to farming after completing their education. In 2002, the two partnered to provide an opportunity for family operated dairy farms to make a comeback by adding value to their product and became the world’s first dairy to use PLA bottling.

The company produces milk, ice cream and drinkable yogurt in PLA packaging and moved into the bottled water business by partnering with a natural spring water company out of Virginia.

This trendy trash can is green in more ways than one. 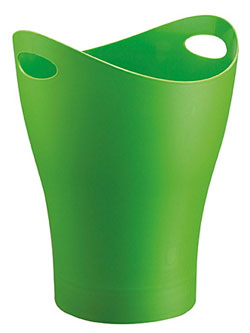 A winner of numerous design awards , the iconic Garbino garbage can from Umbra is now made with corn-based plastic. According to the Umbra website, “Over the years Umbra has designed products with sustainability in mind. We have taken the “Reuse” mentality and adopted a new approach that includes sustainable items like corn and plantation grown wood. Our new line of eco-friendly products promote our objective to provide contemporary, casual and affordable products that foster a healthy environment.”

The 10-quart Garbino, and it’s smaller desktop cousin the Garbini, were named among BusinessWeek’s “Hot Green Products” earlier this year.

Umbra debuted the Garbino Trash Can in 1996, designed by Karim Rashid. “Known for its swerving rim, flowing curves and negative spaces, the Garbino brought glamour to trash cans. The Garbino, with a 10-quart capacity, remains a key part of Umbra’s line; it is a core product that each year introduces Umbra’s newest colors.”

The trendy trash can does come in a variety of colors, but the eco-version is only available in green or black - and the price is pretty reasonable at around $6, but not real easy to find. I did find black ones in a few places, like here at The Container Store, but the greens are on back order.

Boosting yield — the amount of corn grown per acre — is crucial not just for increasing corn production to meet all needs, but to do it in a sustainable way that uses natural resources more efficiently. And developing new seed technology is one of the most effective ways of boosting yield.

But this can be a slow and daunting process. And that’s why new technology from DuPont may be important. DuPont’s Pioneer Hi-Bred International division is using laser technology to help speed up research. The competitive landscape of seed technology has gone far to help feed and fuel the world and should be welcomed by all who are concerned about energy security and world hunger.