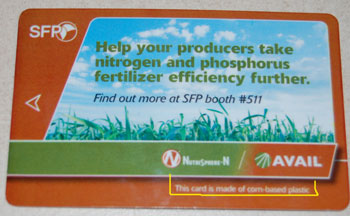 Sponsored hotel card keys are getting to be common at conferences, but at the Ag Media Summit it was the first time I noticed them being made from corn-based plastic. I don’t usually scrutinize my hotel card keys, so there could very well have been at any one or more of the meetings I have been at in the last year or two - but I noticed it this time. Apparently these cards have been commercially available for about two years.

CornCard USA offers the product, which can also be used for credit cards, ID cards or any plastic cards that have been traditionally petroleum-based PVC plastic. The Arthur Blank Company advertises the cards on-line as being, “manufactured from corn, an abundant and annually renewable resource. Since corn is domestically grown, it is readily available for manufacturing, supports US farmers, the US economy, and reduces dependency on foreign petroleum supplies.”

Recently, other companies have taken up the idea, like Advantidge, a California-based security identification company. In April, the company began selling corn cards, which this story I found says is “an eco-friendly card made from a special type of corn that does not affect human corn supply.” I would be interested to know what this “special type of corn is.” Sounds to me like they were just trying to deflect any potential criticism that they were using food for cards! 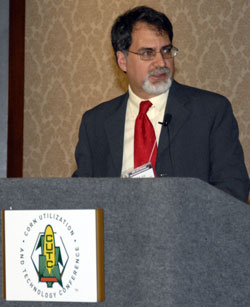 For many people, ethanol seems like a new product, although it’s anything but. What is new is how researchers are finding new products that can be made from ethanol itself.

At the recent CUTC, one of the presentations was “Reactive Distillations for Chemical Products from Ethanol” by Carl Lira, Michigan State University. I spoke with him about the work he’s doing in this area.

Carl says he’s looking at methods to diversify the ethanol production platform. For example, he’s looking at new products that can be made from ethanol so that producers can diversify and react to the market in different ways. He’s trying to get them to think with more of a bio refinery philosophy. From a product standpoint, he’s using ethanol as a reagent to produce high quality chemicals.

He says they’ve done some economic analysis which is available from NCGA and that it looks very attractive.

You can listen to my interview with Carl here:

Here at NCGA’s global headquarters, our front lobby has a display that features some of the many things produced from corn, mostly from polymer. Now, when visitors stand there enjoying the display, they are doing so on carpet made from … corn. The carpeting in our building in the far western suburbs of St. Louis was just replaced by a product made by Mohawk with corn-based DuPont Sorona polymer.

The development of this textile polymer was a joint venture between DuPont and Tate & Lyle. Sorona polymers are resistant to stains, UV rays and the effects of chlorine. They also have excellent “stretch and recovery” and are exceptionally gentle to the touch, making them ideal for a range of purposes, such as swimwear, clothing, car seating … and carpeting. The polymer is also produced from renewable resources and replaces petrochemicals, using less energy and producing fewer emissions than synthetic production methods.

Our new carpeting was underwritten by a generous grant from Pioneer Hi-Bred International, Inc., a DuPont Company. Thanks, Pioneer!

Corn at the Ball Park

Corn will be playing in the major leagues with the boys of summer this year.

Some of the nation’s major league baseball teams are adopting cups made from corn starch this season to help quench the thirst of fans and be more environmentally-friendly at the same time.

Beginning with the 2008 season, the concessionaires at PNC Park will be using corn-based beverage cups. They are also reportedly printing game-day programs with soy-based inks and providing flex-fuel vehicles for team scouts.

According to Bob Nutting, Pirates Chairman of the Board, “We are not launching this program because ‘going green’ is a popular trend. We are doing it because it is the right thing to do. The measures being put into place at the ballpark will have an immediate positive impact. These initiatives not only make sense for the environment, but they make good business sense as well.”

The Oakland A’s are also reportedly using cups made of biodegradable cornstarch this season.

Making it Easier to Get Biobased Products

USDA is trying to make it easier for the government to get and use biobased products.

According to a USDA release, they are updating the federal procurement of biobased products under the BioPreferred Program. The update will clarify the preference process in the Federal Acquisition Regulations (FAR), which will in turn make it easier for procurement officials and manufacturers to participate in the program.

We think of using corn for all kinds of products these days but have you considered deodorant? The folks at Dupont and Tate & Lyle have.

The DuPont Tate & Lyle Bio Products joint venture today announced that it is providing its innovative Zemea(TM) renewably sourced propanediol (Bio-PDO(TM)) product to Terra Naturals Inc., a personal care company, that has developed a line of natural deodorants that are corn-based, aluminum- and petroleum-free. Under the branded GREEN line of products, the deodorants are distributed through United Natural Foods in the United States and Purity Life in Canada and also are available at the Terra Naturals website, www.terranaturals.com.

“We are seeing increasing demand for products made from renewable, corn-derived ingredients in the cosmetics and personal care markets,” Steve Mirshak, DuPont Tate & Lyle Bio Products president, said. “While the demand for renewable products is real, we know consumers don’t want to compromise on the performance of their deodorants. We are pleased to offer Zemea(TM) as an ingredient that has helped Terra Naturals deliver a high-performance line of deodorants that really work.”