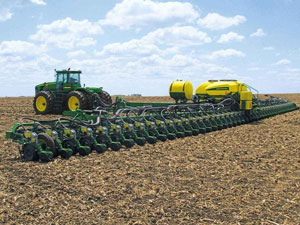 There must be a lot of these 120 foot planters out in the fields - or farmers were just working their tails off last week in the perfect weather - because planting made phenomenal progress all over the corn belt. According to USDA, 19 percent of the crop was in the ground as of Sunday, twice the normal for this time of year, and 14 percent ahead of last year.

Of the 18 states top corn producing states, only two are behind normal now for this time of year - and most are WAY ahead of average. Illinois has 34 percent planted, compared to 12 percent for the five year average and just one percent this time last year. Indiana has more than four times the average in the ground at 17 percent - nothing was planted a year ago. Minnesota has 13 percent of the crop planted where the average is just one percent.

There are some very happy farmers out there right now, like Kelly Robertson of Benton, Ill., who shot this video last week in a multi-tasking mode - planting, talking on the cell phone and shooting video, all at the same time! This video was shot on April 13 and Kelly reports on his blog - “Ground worked like a dream and the corn planted like one also. This is the earliest I have ever planted corn. 10 days earlier than the “old record”.” This is so great to see farmers being creative and using social media like this. You go, plow boy!

“Ugly Baby” is Worth Investment

You may remember a couple of years ago when oil tycoon T. Boone Pickens called ethanol an “ugly baby.” His quote was that ethanol may be “an ugly baby but it’s ours and it will move cars” and he preferred the “less-than-perfect fuel” over imported oil. 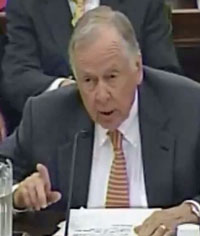 Last week, Pickens testified on behalf of continued tax incentives for domestically-produced renewable energy, including ethanol, during a House Ways and Means committee hearing. “When do we stop investing in OPEC and start investing in America?” he asked the lawmakers. When it comes to energy, he says, “I’m for anything that’s American” including wind, coal, solar, hydro, nuclear, geo-thermal, ethanol, propane, or natural gas.

The straight-talking Texan and chairman of BP Capital Management addressed those who discourage tax incentives for renewable energy on the basis of letting the free market work. “If you think OPEC is a free market, you’re a sap,” he said.

Pickens strongly stressed the need for America to develop an energy plan now. “I’m running out of time, I’m 82 years old next month, and I’ve got to get an energy plan fixed for America because we cannot leave this to generations in the future,” noting his 13 children and grandchildren.

Opening of the Commodity Classic

The opening of the trade show is the real “official” start to the Commodity Classic and that happened Thursday afternoon here in sunny Anaheim, California. The exhibit hall is filled with the latest and the greatest technology and machinery for growers of corn, soybeans, wheat and sorghum. According to the latest official attendance figures, there are 4291 attendees at Classic this year, including 1363 growers from all over the country and over 130 media. This is the 15th annual Commodity Classic, which started as the combined meeting of the corn and soybean growers, but in recent years has grown to add wheat and sorghum grower organizations as well.

Take a look and a listen to the official kick off and ribbon cutting for the 2010 Commodity Classic below and check out the Agwired Flickr photo album for constantly updated photos from the convention. 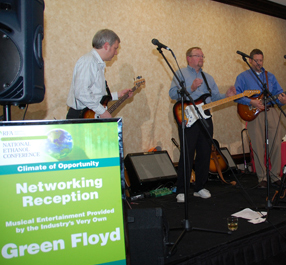 The entertainment during a reception at the Renewable Fuels Association National Ethanol Conference last week came up with some new lyrics to an old Pink Floyd song that hits on the blend wall facing the nation’s ethanol producers.

The group, made up of three ethanol industry executives, is called “Green Floyd” and the parody lyrics to the other Floyd’s “The Wall” include references to EPA administrator Lisa Jackson, the waiver to allow up to 15 percent ethanol in regular gasoline, RFA president and CEO Bob Dinneen and the blend wall faced by the industry if the allowable blend is not increased.

With credit to Frontline Bioenergy CEO Bill Lee, Neil Koehler with Pacific Ethanol and bioenergy consultant Paul Kamp, here are the lyrics to “The Blend Wall” (to the tune of Pink Floyd’s “The Wall”) and a short video clip to enjoy.

We don’t need o-ver production
We could use some E-15
Lisa Jackson, approve our waiver
Listen to our man, Dinneen

Why Can’t We All Be Friends?

National Corn Growers Association (NCGA) First Vice President Bart Schott did a great “Our View” column this past week about why there should be no conflict between “traditional” and organic farmers. He writes:

As a farmer, having marketing choices and diversity is not only a good idea; it is essential to profitability. It also gives consumers options. In that respect, organic farming is no different than agritourism, specialty grains or a host of novel and creative ideas that make farming a vital and evolving profession.

He says the alleged conflict between the two types of farming practices reminds him of a song from the musical Oklahoma! - “The Farmer and the Cowman Should be Friends.” I would say that goes for all of agriculture. Crop and livestock producers should be friends, organic and traditional farmers should be friends, liberal and conservative farm groups should be friends, etc. We are all in this together. Creating division within our fragile industry that makes up only a small fraction of the general public that we serve only makes us more vulnerable to attack on the legislative, policy and public opinion fronts. Like the song says, “Territory folks should stick together, Territory folks should all be pals.” Agriculture is our territory - let’s stick together!

Here is a YouTube video of “The Farmer and the Cowman” from the original motion picture version of Oklahoma!

This is a funny video with a great Thanksgiving message for corn farmers if you overlook the fact that it mixes up corn the vegetable with corn the grain. It was written and performed by Brett Slater and has been viewed over 32,000 times since it was posted in January 2008.

This is probably the first year that farmers have started tweeting their harvest. Expect to see more of it.

One Nebraska farmer (@huskerfarm) sent out a Twitter video of him harvesting some corn in south central Nebraska. Ryan Weeks is just one of many farmers starting to use this new media technology to bring his own farming story to the public - kind of like reality TV, only better!

Ryan uses a BlackBerry and TwitVid to tweet - the program is free and all you need is a good cell phone like a BlackBerry or an iPhone to make it happen from the cab of your combine. Here is Ryan’s harvest tweet:

My first attempt at a harvest video from the combine with my Blackberry Tour. #harvest #farm #agchat

At the World Food Prize Forum in Des Moines on Thursday, Microsoft founder and philanthropist Bill Gates praised the work of Norman Borlaug and called for a new “Green Revolution” to help feed the poorest of the world’s poor. Gates also announced grants totaling about $120 million to help small farmers in developing countries such as Africa.

“In the middle of the 20th century, experts predicted famine and starvation, but they turned out to be wrong – because they did not predict Norman Borlaug. He not only showed humanity how to get more food from the earth – he proved that farming has the power to lift up the lives of the poor,” Gates said.

The billionaire noted that Borlaug’s Green Revolution “helped avert famine, save hundreds of millions of lives, and lift whole countries out of poverty” but “it didn’t go far enough. It didn’t go to Africa.”

He blames that on ideological differences between technology and environmentalism that forces a “false choice” between productivity and sustainability. “It blocks important advances. It breeds hostility among people who need to work together. And it makes it hard to launch a comprehensive program to help poor farmers. The fact is, we need both productivity and sustainability – and there is no reason we can’t have both.”

“We have to develop crops, including new inputs to go with them that can grow in a drought,” Gates said. “We have to have crops that can survive a flood, that can resist pests and new diseases. We need higher yields on the same land, despite more difficult weather. And we will never get there without a continuous and urgent, science-based search to increase productivity, especially focused on the needs of small farms in the developing world.”

I’m no big fan of Bill Gates, but I was very pleased to hear him standing up to radical environmentalists who want us to move backward instead of forward and supporting the use of biotech crops to help the poor in developing countries grow enough food to feed themselves.

You can watch Gates’ address on YouTube in three different segments (due to the 10 minute limit on videos for YouTube). Here is the first installment. 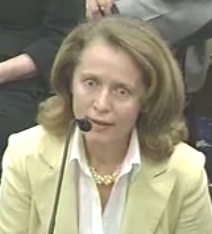 The blunder occurred when Rep. Aaron Schock (R-IL) asked Ms. Oge, who is responsible for regulating all emissions within the United States, about the indirect land use issue. “It’s my understanding that the EPA’s Renewable Fuels Standard 2 methodology assumes that for every acre of soybean crop that is used to produce biofuel, an equal acre of ground is used in the Brazilian rainforest to replace that acreage, is that correct?” asked Schock.

It’s hard to believe this was just a simple mistake. She has the numbers right, but they are transposed and for the wrong crops! One acre of soybeans actually makes 64 gallons of biodiesel and one acre of corn makes over 400 gallons of ethanol. The big problem here is that she said this during testimony before the United States House of Representatives’ Small Business Committee, which does include a fair number of corn state representatives like Schock, but a good number of folks from places like New York, Pennsylvania and Arizona who could very well now believe that it takes 64 acres of corn to produce a gallon of ethanol. That’s well over 10,000 bushels of corn - which will actually produce about 25,000 gallons of ethanol!

This is seriously scary stuff. This lady is responsible for regulating all emissions within the United States! Regardless of whether the international indirect land use change methodology as proposed by EPA is adopted, everyone in the agriculture and biofuels industry should be concerned about the bureaucrats who could potentially regulate them out of business some day. We should be very afraid.

Watch this YouTube video, with commentary, put together by someone in the ethanol industry. It has already been viewed over 1200 times. Send it to everyone you know.

Never Been on a Farm

Mark’s recent post about Washington Elites not knowing about agriculture reminded me of a YouTube video from a Congressional hearing with Margo Oge, head of EPA’s Office of Transportation and Air Quality, about the proposed Renewable Fuels Standard. Thanks to the Renewable Energy Group (REG Fuel), Inc. for sending me the link.

Congressman Lynn Westmoreland (R-GA) questions Ms. Oge about her experience with agriculture and if she understands the impact her rulemaking might have on U.S. farmers. While she has been with EPA for 29 years and in her current position for 15 years, Oge admits she has never been on a farm. “My great-grandfather and grandfather were farmers in Athens, in Greece where I grew up, but I have not spent any time on farms in the United States, if that is your question,” she says. But, she has spent lots of time talking to farmers and ethanol producers who come to meet with her in Washington DC, so that should be good enough - right?