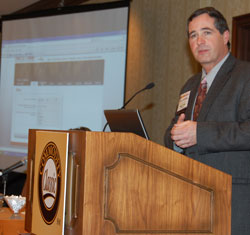 Farmers will soon have a new tool to analyze their natural resource use and key crop production inputs, introduced this week at the Commodity Classic by Field to Market, The Keystone Alliance for Sustainable Agriculture.

The Fieldprint Calculator was developed with input from a diverse group of grower organizations, agribusinesses, food companies, economists and conservation groups, to help farmers evaluate natural resource use on their operation compared to industry averages. These measures could help improve production efficiencies and profit potential.

The calculator will be available at www.fieldtomarket.org beginning March 15 for grower testing and feedback.

“Sustainable agriculture must make sense economically as well as environmentally or it’s not sustainable,” said Doug Goehring, who grows corn, soybeans and wheat in North Dakota. “This calculator will help producers understand how they’re being sustainable on the farm today, while providing insight into for future improvements that can benefit the environment and our bottom line.”

The news these days is pretty scary - so just for fun, enjoy this video of some terrified corn cobs!

Ron is the roasting man at Sunbelt Ag Expo. I caught him roasting some ears of corn early in the morning before his booth was busy, although he says that there are people who like a corny breakfast.

He cooks with propane and says he does about 75 ears at a time. He like the combination of yellow and white sweet corn because it looks good and is very tasty. He says a key to a good ear of roasted corn is to cook it hot and for about a half an hour.

As you’ll hear Ron say in this video, “we dip it in some butter and you’ll grin from ear to ear.”

Proud of What They Do 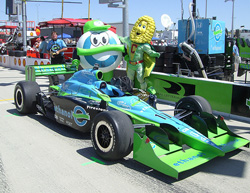 Sunday was “Proud to be a Midwestern Corn Grower Day” during the telecast of the Iowa Corn Indy 250. The only thing that would have made the day better would have been the Team Ethanol car in the winner’s circle. But Ryan Hunter Reay certainly gave it a good go.

Just about every other commercial during the race broadcast was one from the corn growers and they were excellent spots. I also loved the opening “start your corn ethanol-fueled engines” heralded by Iowa Corn Promotion Board chairman Julius Schaaf.

The spot below is my personal favorite from the race, featuring corn growers proclaiming they are proud to be America’s feed, food and fuel providers. GO Corn!!!

Check out all the photos from the race and pre-race activities here:
Iowa Corn Indy 250 Photo Album

For audio and video interviews and overall coverage of the Iowa Corn Indy 250 - check out this link to Domestic Fuel.

I know I already posted NCGA VP, Bob Dickey’s remarks earlier but I also have video of it too.

Feel free to watch Bob get things started here at the CUTC in Kansas City, MO.

Aerospace engineer and author Robert Zubrin has been getting some media attention lately for his book, “Energy Victory,” in which he outlines a simple plan for “winning the war on terror by breaking free of oil.” Most recently, he was featured on a segment of the Business News Network, a popular nationwide TV show in Canada.

Zubrin believes the American public is getting tired of being beholden to foreign oil interests and he advocates Congress passed a law requiring that all new cars sold in the USA be flex-fueled.

We’ve been happy to feature some video content here on Corn Commentary. It’s been noticed too.

I got an invitation from Energy Policy TV to upload the video with NCGA Chairman Ken McCauley talking about the energy bill. I got that done this morning and you can find it here.

Check it out. You’ll find quite a few video clips uploaded in the biofuels category. Here’s how they describe themselves:

Until now, the way to learn about policy-creation was to subscribe to expensive journals. These journals told you how they viewed the events they cover, often quoting original sources.

This is no longer sufficient. Transparency in the policy process is required to assess complex and urgent issues such as energy and the environment.

Energy Policy TV is changing the way you get your news and information by delivering ONLY original sources-thousands of them. You will never see us “reporting” on what someone said; instead you will see that person saying it. It is significant that we deliver these original sources in video. This allows you, for the first time, to get a true sense of the context in which events transpire. No journal or transcript can do that. We do not comment or editorialize on any content. That is up to you. We have no agenda other than providing as much relevant news and information as possible, which we offer as a free public service with no requirement for subscriptions, passwords or logins.

While we’re on the subject of video clips from the recent National Association of Farm Broadcasting here’s my final one with NCGA Chairman Ken McCauley. With the Senate back in session and expected to consider new energy legislation I thought it was timely to provide his perspective on where things stand.

Ken says he’s really optimistic about getting new energy legislation, especially a new Renewable Fuels Standard (RFS). He thinks that the price of oil is sending a strong message that we need a renewable fuel source. That’s creating a sense of urgency on Capitol Hill that may move things forward quickly. He says that corn growers want to do their part in helping America become energy independent.

A Proper Food vs. Fuel Perspective

Here’s another installment of our Corn Commentary videos that were recorded at the recent National Association of Farm Broadcasting Convention. In this one I interview NCGA CEO Rick Tolman and University of Missouri ag economist Dr. Ron Plain. They point out that our corn growers have produced to meet demand for both needs of our corn. It’s also interesting to note that higher corn prices haven’t really impacted food prices much. In fact, it’s really things like transportation costs that have driven food prices up.

As they point out, no one is starving anywhere because of biofuel production. The fact is our corn production has a lot of opportunity to grow due to demand and new technologies and that’s good for our farmers, our economy and our country. So that’s the word on this “renewable fuel” issue!

Getting Thanks From James Garner

While we’re still in a thanksgiving spirit it’s good to know that there are a lot of people who think America’s corn growers are doing a good job. They’re willing to speak out and say so too. For example, take James Garner:

“Many Americans don’t realize that we enjoy the safest, most affordable food supply in the world, thanks to our country’s farmers,” Garner says. “This year, our corn growers are also helping us to solidify a more secure energy future by also producing corn for cleaner-burning renewable ethanol. I hope others will join me in thanking corn growers for helping fill our grocery shelves and still filling our cars with renewable fuel.”


If you haven’t already told everyone in your personal contact list about it then please make sure you direct them to Farmers Matter. It’s a place where there’s lots of good information and consumers can also leave their own message thanking farmers this holiday season by participating in a video contest and entering to win $1,500.