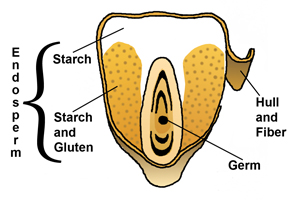 Researchers at the National Corn-to-Ethanol Research Center (NCERC) may have found the kernel’s secret recipe for making cellulosic ethanol, recently announcing the successful production of ethanol from the cellulosic portion of the corn kernel.

“This research is demonstrated proof of the viability of ‘generation 2.0 ethanol,’” NCERC Director John Caupert said. “By utilizing existing technologies readily available in the commercial marketplace, the Center was able to produce a biofuel that builds upon the strengths of conventional corn ethanol and the promise of cellulosic ethanol, thus making bolt-on cellulosic ethanol a reality.”

Caupert added that the potential for cellulosic ethanol has significant immediate and long-term impacts on the biofuels industry generally and the ethanol industry specifically. “Any of the 211 existing ethanol plants in the United States could be retrofitted with existing bolt-on technologies to produce cellulosic ethanol from corn without the need to build new facilities,” Caupert said. “This translates into opportunities for jobs and economic development, particularly in rural areas.”

On average, 8 to 9.5% of the corn kernel is fiber, of which about 5% is in the pericarp. NCERC Assistant Director of Biological Research Sabrina Trupia will be presenting more information about the new development at the Fuel Ethanol Workshop June 4-7 in Minneapolis.

The NCERC at Southern Illinois University, Edwardsville is a nationally-recognized research center established through federal and state initiatives, with support from the Illinois and National Corn Growers associations, and dedicated to the development and commercialization of biofuels, specialty chemicals, and other renewable compounds.