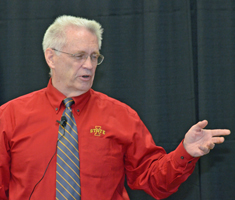 Iowa State University professor Dr. Elwynn Taylor is one of the nation’s foremost extension climatologists, but even the best sometimes get the weather forecasts wrong.

When asked this time last year what the drought possibilities were for Iowa he said “less than 50%.” Take those odds to the racetrack and you would have been a big winner last year if you had bet on the drought.

At the World Pork Expo last week, Dr. Taylor provided his insights for 2013. “My outlook I put out most recently for the national corn yield is 147 bushels to the acre,” he began. “147 is considerably better than 123 for last year’s corn yield for the U.S. and considerably below the trend line which is 160.”

He noted the radical weather extremes Iowa has already seen this year, going from snow in early May to 101 degrees on May 14 to flood on May 24, breaking all kinds of records set in 1947. “Seems like I’m mentioning 1947 quite a bit,” said Taylor. “This is the year that we’re in right now with the volatility of weather that we had seen in ’47.”

“We’ve got a hurricane season just started expected to be on the harsh side, drought likely to persist in the western part of the Corn Belt, temperature high and low both being significant and more extreme than usual, and climate likely increasingly erratic during the next 25 years,” Taylor summarized. “Manage your risk, that’s the way we live through the volatile weather.”