For years now, the National Corn Growers Association, along with a broad array of other agricultural groups, has stressed the need for farmers to tell their own stories about food and farming. Time and time again, they have tried to direct attention to the growing public desire to understand what happens to the food on their tables prior to its arrival at their grocery stores. Through programs like CommonGround and the U.S. Farmers and Ranchers Alliance, they have created pathways for farmers to reach broad audiences and offered training tools that help increase the effectiveness of their efforts.

The everyday business of farming and ranching often saps the time and energy of the men and women who grow our food though. With so many demands already placed upon them, the task of volunteering these precious resources for something so seemingly apparent to those involved in agriculture seems daunting, if not impossible.

Last week, the attendees at BlogHer Food 2013 had the opportunity to meet real life farmers and have honest, open discussions about food. Their incredible interest and insightful questions served as a strong reminder that this need for dialogue is not only real, but it is actually growing.

CommonGround volunteers Sara Ross and Morgan Kontz, who farm in Iowa and South Dakota respectively, saw firsthand how great this need for an open dialogue with consumers is. As bloggers, many of whom have thousands of avid followers, stopped at the booth, they warmly received these real-life farmers. Many expressed gratitude for the chance to talk about what happens on modern farms and ranches. Even those who disagreed with some practices came to these conversations with an open, respectful spirit and an honest desire to not only express their own viewpoints but to also truly listen to what these women had to say. 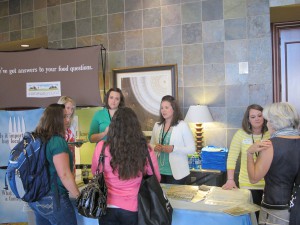 Ross and Kontz met with a steady stream of interested bloggers over the course of the two-day event.

Friday night, Ross and Kontz joined USFRA Faces of Farming and Ranching winners Chris Chin and Will Gilmer, along with other hog and cattle ranchers, to share a meal with a group of approximately 40 bloggers who took time away from the conference, foregoing a night of fun on Austin’s Sixth Street, to visit an urban farm and learn more about how the foods about which they write are grown and raised. The incredible variety of bloggers who attended was astounding. The interest that they brought was genuine. 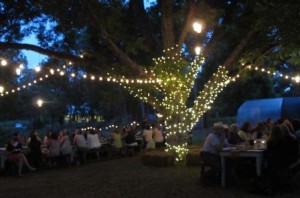 From Google Glass-wearing hipsters to DC policy wonks, the dinner attendees illustrated how diverse the demand for dialogue about agriculture has become. While these women and men brought a myriad of interests and perspectives, they shared two main commonalities. They wield significant influence on broader consumer opinion through their work, and they want to know more about what happens on America’s farms. 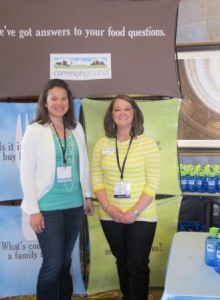 CommonGround volunteers Sara Ross (left) and Morgan Kontz (right) share their story of farming. Do you?

Conversations about food and farming will happen regardless of farmer involvement. Show consumers that you care about their concerns and want to share with them the amazing story of today’s American farmer.